Jetty To Jetty Half Marathon - A Lesson In Pacing 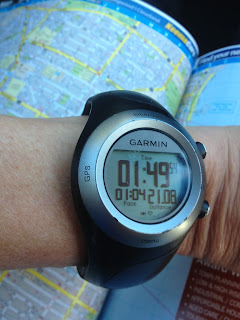 Yes, it's probably a surprise that I was actually racing yesterday. I kept it on the down low so as not to put much pressure on myself. I hadn't done a whole lot of longer runs in the month leading up to the Jetty to Jetty so I didn't know where I was fitness-wise. And let's face it - I don't do pressure that well.

So it was a very relaxed me that left home at 5:30am yesterday. I even managed small conversations with Iven without feeling the need to puke. That's always a good sign.

We made it to Redcliffe about half an hour before the race was to start and I made Iven drop me off near the porta-loo queues and told him to meet me back at the playground when he'd found a park. I'd stupidly taken my bag out of the car and was going to hand it over to him when he got back but 15 minutes later he still hadn't arrived and I started to get a little anxious. Luckily JT, a squad-mate, was passing by and offered to take the bag so I could line up at the start. I made it there with less than ten minutes to spare. Hmm, I think Iven and I need to work on our communication.

All week I'd been obsessively checking the weather forecast and it hadn't looked good. Wet for most of the week then clearing to a very windy day. Not great conditions for my 1:50 beating attempt but we runners have to take whatever the weather gods dish out. But as it turned out, the day was perfect. Yes, there was a bit of wind on some of the course but certainly not the gales they'd predicted. No rain and perfect temps made me a happy starter.

I found myself just behind the 1:50 pacer and even though I had a loose plan in my head (to try to stay in the low 5s for each kilometre), I decided that I must have been meant to follow him. And this was a mistake that I'll never make again.
The gun went off and my pacer took off like a scared rabbit. There was a little dodging and weaving but not too bad. I was staying in contact but felt like I was running a little harder than I would have liked. But we did have to go up a hill nearly straight away so I decided that it was okay and just trust the pacer. I got to the first k (by my watch - there were only a few kilometre markings through the course) at 5:10. I knew 5:12 was the pace I had to beat to go under 1:50 so I was going okay.
Soon after we passed 1k the pacer started to speed up. So I sped up too. I didn't notice it at first because I was just trying to keep the same distance from him but the 10m that he was in front stretched out quickly to around 20 then 30. The second kilometre beeped - 4:57. Okay I'd banked a bit of time on that kilometre but it was faster than I'd planned.

I am obviously not a normal, rational or intelligent person. No, I decided that I'd done two kilometres (yes, ONLY TWO out of 21) at a faster pace than I had run for some years so I'd be fine. Yeah, it might hurt towards the end but I'd be right. The next kilometre clicked over at an even faster pace. I was laughing and spitting in the eyes of the running gods. Apparently they don't take kindly to that sort of behaviour.

Kilometre 4 had a hill and a water stop so my pace slowed a littler - 5:02 - but I made up for it in the next kilometre 4:50. The pacer was almost out of sight at this point so I was effectively running my own race but it didn't really slow me. I got to the 10k mark about one minute slower than I'd run the 10k at Gold Coast just a fortnight ago. Alarm bells were going off in my head but something, let's call it blind optimism, kept me from slowing.

We'd turned back at around the 10k mark and the course changed from mostly road to footpath along the water. It was just gorgeous!. Blue sky, blue water, pelicans, dogs running on the beach. The support was sparse but enthusiastic and the volunteers were friendly and supportive. 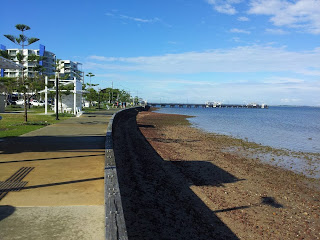 I got to 15k still managing respectable splits but I'd borrowed too much and the energy debt-collector was there wanting to be paid. My 16th kilometre blew out to 5:21. There were still 5k to run, I was getting a stitch and I was ready to stop. People started to run past me. I'd try to hang with them for a while but would have to give up before long. The few people that I did pass I did so with respect because I knew that they were probably hurting worse than me.

But on the bright side, I caught the 1:50 pacer and his single follower. And I left him eating my dust - for about three k until he decided to ditch her and finish the race alone. I also passed the guy who was towing his friend on roller-blades who was taping the race. One volunteer asked if I was okay and I smiled and nodded, thinking that I hoped I didn't look as dreadful as I felt. But she let me pass without calling the paramedics so I must have faked it well enough.

I've run the first section of this race a few times before in the 5k and 10k events and there's a hill at the end that is a heart and spirit breaker. I was already hurting pretty badly and had started to dread the hill. And it wasn't the only hill before I finished. There were a couple of little rises that were also going to be testing close to the end of a half.

One of those rises came in the second last kilometre. And I actually made it to the top .. then promptly stopped and walked a bit. I wasn't the only one but that didn't make me feel any better. I'd totally stuffed up the race pacing but I hate walking in a race. But my fear of the killer hill was what made me want to catch my breath.

Another hill came and I made it to the top but managed to keep running this time but I was still anticipating that awful hill and was convinced I'd have to walk some of it. Someone yelled that it was all downhill now. But I knew that my nemesis still had to be conquered. So I held back a bit. The crowds were getting thicker and I could see the race precinct. I looked at my watch and there was only a few hundred metres to go so I picked up my pace. I turned the last corner to see the clock ticking up to the 1:50 but I couldn't make it in before it had ticked over. But a glance at my watch showed me that I'd done it! All pain forgotten.

So where did that last hill go? Either the hill that I thought was the second last was the last hill but I remember it as harder than that. Or they changed the route slightly.

So the lessons learnt from yesterday are to stick to your own race plan. Don't be afraid to change plans mid-race if what you're doing isn't working. And maybe stretch a little more before you get back into the car for the 45 minute drive home. But when all's said and done I still ran the fastest half that I've run since 2010 so it's not all bad.