How Do You Do It?

I just have a question for all you marathoners out there. How do you do it?

Not the running part. That bit's pretty straight forward. One foot in front of the other. Left foot, right foot repeat until you get to the end of the run.

No, I mean all the rest of life PLUS the running part. I think I forgot from three years ago just how tired all those extra kilometres can make you.

My training's really bumped up in the last couple of weeks. No longer am I getting those cruisy 50k+/- weeks. My numbers are more in the late 60k range and will be pushing over 70k before too long. I know these distances aren't particularly extraordinary for marathon training. They are probably along a more conservative line. But for me they're pretty significant.

In the last week I've clocked about 66k and after my 17k (which was supposed to be 16 but it was a new route and what's an extra kilometre in the scheme of things) I was tired. But I still had a whole day ahead and there were things that really had to get done.

Like shopping. Things can get pretty hairy around here if there's no food and four hungry males. And I get pretty sick of hearing 'there's nothing to eat' (rubbish, even when I haven't shopped the pantry and freezer still are pretty full) and 'what can I make for dinner?' (to which I internally scream - use your own brain and make a decision). To say nothing of stomach growls that are so loud that they drown out the cooking shows that I like to watch. So after making myself a little presentable (ie waiting till my face was a less disturbing shade of red and showering off some of the sweat, salt and stench) I dragged my tired legs over to the grocery store.

My usual grocery store has just undergone a transplant. It's been totally moved from its location of many decades in the shopping centre. And they've re-arranged the layout of the store. 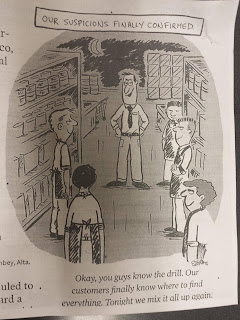 I have enough trouble shopping when they just change the packaging of what I usually buy or change its position on the shelf. Changing the whole shop has not improved my shopping abilities or my disposition. And to do it when I'm training for a marathon borders on the 'cruel and unusual'. Heaven knows why they didn't consult me when they were planning this move. It would have suited me a lot better to do it a month or so ago or some time after the middle of October.

The Powers That Be aren't totally heartless, though. They've provided all shoppers with a handy little list of alphabetized products so you have SOME hope of finding what you want. But I stress the word SOME because they've forgotten to include grocery basics like butter, cheese, yoghurt ...

If you want things that aren't obscure, well you're on your own. Unless, of course, you ask someone who works at the store. But even then most of them have no idea how the new layout works. And if you do manage to get an answer it will usually be that what you're after is way up the other end that you started with. After running 17k I figure that I don't need bread that much. The stale and, possibly, mouldy three slices on the freezer are going to have to do.

I chatted to the checkout chick (who's more of a hen than a chicken) about how everything's going. Nice to know that the staff hate the new store too. It was designed down in Melbourne headquarters and they had no idea that the store in Indooroopilly in Queensland (a couple of thousand kilometres away) had parcel pick-up so they hadn't actually made design concessions for that. And the you-beaut, fancy carousels that hold the plastic shopping bags don't really work for people who bring their own recyclable bags. Sure they may look pretty but pretty means nothing if they don't do what they're supposed to.

After the shopping it was time to get some dinner into the slow cooker. And then off to work. I could only manage about an hour before I knew that I wouldn't make the rest of the afternoon without a nap. And because I had most of my work under control, wasn't expecting anyone and am my own boss I can do that. Take the phone off the hook, turn my mobile to silent, lock the doors and go to sleep. But not everyone has that luxury. A lot of you have nine-to-five jobs and a boss who doesn't take to you curling up under the desk to have a paid nap. And it is you people that have my respect, admiration and awe. I don't know how you do it! But if you have any tips, can you please share?
Posted by Char at 5:37 PM