Something's happened to my sense of perspective over the course of the last few months. I realised it this morning when I was having breakfast with some friends and one asked how far I was running this weekend. My answer? Just 28 kilometers.

A couple of months ago I considered 28 kilometers to be a really long run. I hadn't run that far in three years and it intimidated me a little. But after all the training and building up to bigger and bigger distances, 28 kilometers gets to be 'just' like it's no big deal. I'm now looking at it from a different angle.

Our waiter is also a runner and did his first 10k race last weekend. I asked how it went and he modestly told me he'd run 46mins and now he was hooked. But he would never do anything crazy like run a marathon. And I had to have a bit of a laugh. That's exactly what I said when I started running with the squad. Actually, I went even further - never run a marathon OR a half marathon. I'd run two half marathons before and the last one I did was so awful that I never wanted to repeat the experience.

But again my perspective's changed. When you hang around with a group of inspiring people of all different ages and running abilities and you see them working towards a challenging goal you start to get little questioning whispers in the back of your mind. Hmmm, maybe I could too? And one day those whispers become so insistent that, while you're in the throws of a post-run endorphin high, you actually sign on the dotted line and pay over the big bucks.

It'd be wrong to waste good money and not go through with it so for the next few months you rack up the kilometers. Your shortest run becomes the speed session and you really don't bother getting out of bed to do less than 12k. Years ago my go-to run was a 5k loop (which I've recently found out is actually only 4.5k) and I thought I was pretty hard core doing a couple of those a week. Big change in perspective.

People start to comment on how much you're running. Non-running people mostly. And it's interesting to see things from their perspective. Because from their perspective, what you're doing is a whole heap of crazy! Getting up at 3:15am on a Saturday. Running till your toe-nails bruise. Having to spend most of the weekend recovering from your super-human Saturday effort. Having unmentionable areas of your body chafed. Whimpering when you step in the shower and the water hits said unmentionable areas. Going to the toilet shamelessly in the bushes because there's no toilet around. Accepting that discomfort is just part of the process so you might as well embrace it.

Yep, when you put it like that it is a whole heap of crazy. But it's also an adventure. And a voyage of discovery about yourself. And, if you run in a group, it's an adventure that you take with friends. Friends who get it. Friends who goad you on to dream big, audacious dreams because they're just as crazy as you - or even a bit crazier (you know I mean you Mr I-run-24hrs-around-a-track-then-back-up-a-couple-of-weeks-later-with-a-marathon Smyth ).

So the big question now is, will this change in perspective be permanent? 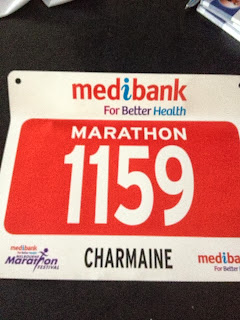