Shopping - The Cure to Doubts and Freak Outs.

I've been doing a serious amount of over-thinking since Saturday. Seems that it only take one tiny hiccup for me to completely doubt myself. I have one awful run and all of a sudden I'm thinking of worst case scenarios. Bad run = overtraining syndrome = won't be able to run in Melbourne in October. Pity they don't have Olympics for worriers. I'd definitely win the long jump to the wrong conclusion.

So yesterday I decided that I'd take it a bit easy in speed session. And how did that go, you ask. Let's just say that intentions and actions don't always match up perfectly. I might have just run the way I normally do on Tuesdays. Something just seems to happen on Tuesday morning with my brain. It switches to the 'work hard and reap rewards' mentality almost automatically. And then there's the lure of catching someone who's ahead of you. And the shame of being caught by someone behind you. I know it's all in my head but that piece of footpath that we run on every Tuesday can feel like a gladiatorial arena.

I did feel a little worse for wear after the session. So I had a nap and I refuelled with high anti-oxidant food and good carbs and protein. And I stretched and tried to think positive thoughts. But there was still that little niggle of unrest all day.

I've woken up this morning in a much better frame of mind. A good night's sleep always helps. My legs aren't sore or tired (which they were most of last week - a little thank you gift from the half marathon). I'm feeling rested. And I'm feeling much more positive about Melbourne than I was on the weekend.

So positive, in fact, that I went shopping today. I know that's an obscure connection but I promise it makes sense. I went shopping for a pair of running shorts. Right about now, Iven will be wondering what's wrong with the ten pair of shorts already in my running drawer. And honey, you're right - there's absolutely nothing wrong with them. The problem is with the undies I have to wear with them. And the chafing that a 30+k run can create. And the disturbing yelps of pain that come from the bathroom on Saturday morning.

I used a lot of bodyglide and another product called Skin Slather that I won in a giveaway in all the chafe-sensitive areas last Saturday to good effect. 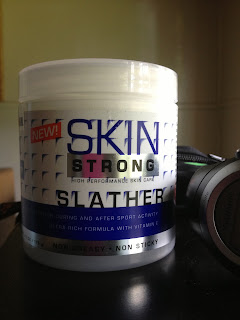 In a moment of inspiration I decided that shorts with built-in tights (not undies because I've had issues with unkind undies' elastic before) might be a good option. And I managed to find a very nice pair at Lorna Jane's this morning. 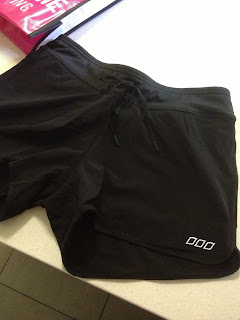 These are going on a test run tomorrow morning. And if they work out how I planned I might just get a second pair. How decadent! But then I'm all for a few luxuries if they can stop unnecessary pain.

So now I'm feeling back on track. Positive. Doubts temporarily quelled. I can't promise that I won't have more drama queen moments but the road to a marathon is never straight or without a few speed bumps. All I have to do is get around every corner and over every bump one at a time.