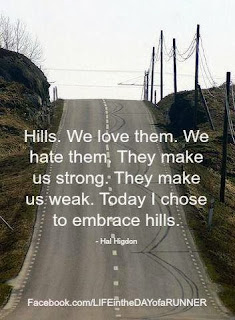 Hate setting the alarm for 4:45am for the second morning in a row. A Sunday morning, for crying out loud! When you know that the rest of the world will be sleeping in.

Hate waking up at 3:10 and not being able to get back to sleep because you know that the alarm is going to go soon anyway and you don't actually want it to go and wake your sleeping partner even though he says he doesn't mind and always gets back to sleep.

Hate choosing what to wear. Should I go a little understated so I have a decent chance of blending in with the scenery in case of the very likely bush toilet stop? Or do I go as bright as I can and just cope with the sniggering cyclists when they see me emerge from the bushes but have a good shot at being found on the trails in case I break a leg up on the mountain. I choose life over dignity - bright it is! 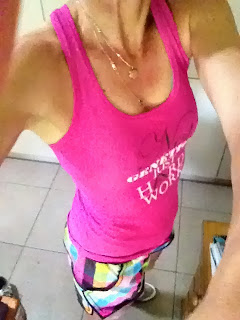 Love being the first car in the car park at Slaughter Falls. Love that it's quiet and peaceful and it's like being in the country even though you're only a few kilometres from the city.

Love that the first kilometre's flat. It lulls me into a false sense of what's about to happen.

Hate that the first kilometre is over so soon. Hate that I'm breathing heavy so quickly. Hate that the path is so rocky under-foot. Big enough rocks that you have to be careful every step to place your feet so you don't roll an ankle. Hate the rock steps and having to lift up my leg a lot higher than my normal shuffle. Hate feeling so unfit.

Love the little downhills and catching my breath for just a moment. Love knowing that I'm the first human that's been on this trail today.

Hate that I'm not the first living creature here today. Hate that having to watch the ground all the time means that I run full on into a face-high spider's web. Complete with rather large spider.

Hate the feeling of spider's web over my face and neck and shoulders and arms. Hate trying to peel it off. Hate wondering if the spider's going to come along for the rest of the run. Hate that the feeling of sweat trickling down your neck is not dissimilar to the feeling of a spider crawling.

Love that the web-removal stop helped me catch my breath just a little but I don't have to count it as a stop because every runner on the face of the earth allows web-removal as a legitimate reason to pause the watch.

Love smelling the bush. That dusty, eucalyptus scent that takes me back to walking along dirt roads with my Grandma as a child looking for those weeds that grew the round seed pods that we'd pop like the balloons and marvelling at the colours in the tiny wrens that flitted past us as we walked. Looking in creeks for tadpoles and trying to skim flat rocks and see how many times they could skip.

Love listening to the sounds of the of the lorikeets, cockatoos, whipbirds, bellbirds and that other bird that I can't identify.

Hate that I've forgotten the name of those plants and don't know what made that other bird call. Hate that Grandma could have told me both of them. Really hate that she's no longer here to tell me about the bush that was her home. But love that being here, running through the bush has made me think of her. Has, just for a moment, brought her back to me again.

Love making it to the top of the mountain without stopping!! (Except for the spider incident and we all agreed that that wasn't a real stop). Love knowing that I can run the rest of the hills fairly comfortably (I say fairly because hills will never be easy for me).

Love that there's frequent downhills now. Love feeling like I'm running fast with so little effort. Love that the momentum carries me up some of the next hill. Love that it's cool (ish). Love that my stomach's behaving and I won't have to do the walk of shame into and out of the bushes.

Love that there's still hardly anyone around. Love feeling like I own the mountain. Love the view from the top. The light streaming from the clouds. Glorious!! 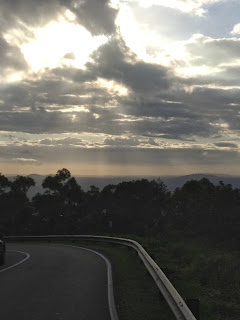 Love the last couple of kilometres. That view. Feeling strong. Running at paces that I normally only hit at the beginning of a speed session but I'm at the end of a hill run and feeling like I'm flying.

Love that I've finished and it's only 6 am.

Love knowing that even if I do nothing else all day, today's been a good day.