Not Just Any Old Shoes 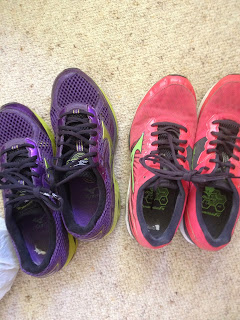 I gave these shoes away the other day. To a group who was going to hand them on to runners who couldn't afford to buy their own shoes. And even though I hadn't worn them for a while, I found it hard to see them go.

I'm not the sort of runner who likes to horde their shoes. Yes, I have a few pairs on the go but once I start waking up with my feet aching, walking around the house like an eight year old, I retire them - generally to the bin. I'd held onto these ones because of a previous shoe collection but really wasn't prepared for how I'd feel giving them away.

I'd bought them right at the beginning of 2013. Just a few weeks after being diagnosed with low testosterone levels. Just a few weeks after starting treatment. These shoes weren't just any old shoes. They represented an ending and a new beginning - an end to feeling sick and tired all the time without anyone being able to tell me why and a beginning of a stronger, healthier, happier me.

So when I went into my wardrobe to find them I was hit by a sudden urge to put a little note in each pair for the new owners.

I'm so excited that my beloved shoes have found a new home. I hope they give you as much joy as they've given me.

They've seen me safely through long runs, short runs, fast runs, slow runs. They've done some races - a couple of short ones and a half marathon. They've run on roads, on paths, on grass, in the rain, in the dust, in the light and in the dark. They've run with friends and they've run when the only sounds were that of the birds and the  noise that they made when they hit the ground.

They've run me from unhealthy back to healthy again. They've run away all the stress and frustration and anxiety that comes from living and run me to a place of happiness and calm. They've helped me be a better and nicer wife and mother.

I have to apologise for the smell. But just know that the smell of sweat can be a satisfying one - the satisfaction of knowing that it was hard but you did it, the satisfaction in having had the courage to give it a go, the satisfaction that you're looking after your body, mind and soul by putting one foot in front of the other.

I hope that these shoes are the start of a life-long love affair with running or the continuation of an obsession. And I hope that your dreams are envisioned and realised in these shoes. 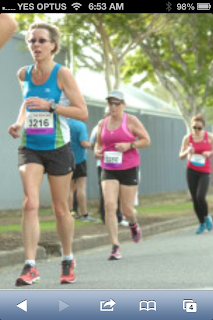