I Must Be Crazy Thinking That

I've had a thought rumbling around in my head for a while.

It's a bit like an ear worm. Try as I might, I can't get rid of it by trying to hum bits of my favourite songs. Those same 16 bars keep playing over and over in my head for hours. Or in this case days.

It's crazy because as a runner, there are some things that I really don't like to do. Like running up hills. And for me a hill is defined as anything with a positive gradient. 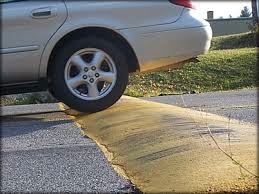 See that yellow thing under the car? I would definitely call that a hill. A very small hill, granted, but a hill nevertheless.

So what I'm doing, thinking what I'm thinking defies logic, the laws of gravity and some of my own personal principals.

I want to run the Powerful Owl Trail at Mt Coottha. 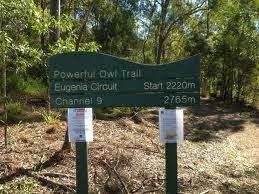 There, I've said it and I've heard the gasps of shock resonating around Brisbane. I know I've said I'll never run it again. And I absolutely mean it. But I'm really referring to the downhill direction. The trail is steep and the ground is incredibly unstable - your feet can disappear from under you in a millisecond. And I am a huge coward when it comes to running downhill on unstable footing.

No, what I want to do is run up it. All the way to the road at the top of the trail then run around the road loop so my downhill will be on solid ground.

I used to walk up Owl Trail with my sister about a decade ago and I found it tough. Then the first day I ever turned up at hills with Coach Chris he told us that we were going to run it. I thought he was joking. He wasn't.

One of my proudest running achievements was running up Owl Trail three times in a session without having to walk. That's huge for a runner who sucks at hills.

Since I've started running hills and trails again, I just can't get rid of the thought of re-visiting my old nemesis. I know it'll be tough. That my legs will burn and I'll feel like I can't breathe. But I also know that I'll feel awesome if I can do it. And I know that I'm not going to stop thinking about it until I give it a go.