My Year So Far In Runs.

There's always so much hype going into a new year. How are you going to see of the old year and welcome in the new? What are you planning to do to reinvent yourself (for a couple of weeks before you realise that your resolution was way too grandiose and you really didn't have a plan to make it stick and hey, there's always next year ...)?

As you'd expect, seeing as I'm really not into celebrations that involve dressing up, large crowds, staying out late and boozing, my plans for the evening were to watch a bit of tennis then take my aching body to bed for an early night with my ear plugs in so I could be up before it got way too hot and start the new year the best way I knew how. In my happy place.

Why was my body aching? Because of a cruel and sadistic coach who takes pleasure in our pain and a body that's not used to running 100m reps at close to world record pace. And I'm not exaggerating about the world record pace - for an 80 year old woman. All I have to do now is maintain my fast twitch muscles for another 30 years and that record's going down!

By 5am New Year's day I was up and out of bed wearing my traditional (since I started running trails 8 weeks ago) bright pink singlet and bright checked shorts. Yes, I'm still convinced that my less than amazing coordination will result in a fall and a twisted ankle or broken arm in a mobile phone black spot so I need to be able to be easily spotted by helicopter.

And this is how I finished the 10k up and around the mountain - sweaty, dehydrated and happy. 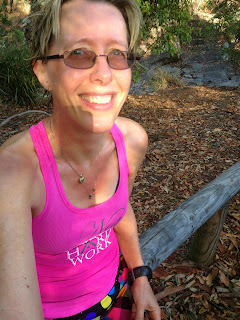 Thursday morning I was up and out the door early for another 10k (which was supposed to be 12k but I hadn't checked my program before I left home). And once again I ended up looking like I'd been training for a swim not a run. 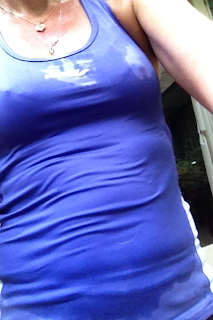 Once again I spent the rest of the day looking for a cool spot and trying to rehydrate.

Friday was a rest day which meant that I got to sleep in a little (it's hard to sleep in when there are kookaburras and lorikeets and cockatoos going off outside your window from about 4:00am) and the dogs got to go for a walk after the temperature had cooled to just under 30C.

And then came Saturday. Saturday which promised the joy of running in oven-like conditions and a potentially new temperature record. Saturday where the maximum was expected to be over 40 and the minimum around 26. Saturday - our long run day!

I'd tried to convince Coach Chris to get an ice cream van to follow us around for the entire run. He said he'd look into it and that's pretty much as far as that plan got (Personally I don't think he tried hard enough). But he did come up with a pretty good alternative - a run through Southbank parklands where there's a public pool that we would stop at on the way back.

From the start of the run it was all about making it to the next water stop. The weather was quintessential Summer in Brisbane - like someone had thrown a warm blanket over the entire city and not much breeze (except what you created yourself by running through the soupy air). It only took around 100m of running before I'd worked up a sweat. It only took a hundred metres more before I wished I was still back in bed in an air conditioned room.

But one does not simply give up on a long run. Giving up would require an elaborate ruse of faking an injury and I'm not a good enough liar to carry that off so I kept going.

We passed the pool on the way out to our turn around point and the heady, redolent aroma of chlorine was almost too intoxicating to resist. But on we slogged. For a couple more kilometres. Stopping at every water stop we could find.

Finally we were at the turnaround point and on our way back to the blessed relief of the cool, cool water. A bit more running and we were finally there. Strip off the shoes and socks. And the watch. And take the car key out of my pocket. Then, and only then, could I finally jump in.

It was like jumping into a tepid bath tub. A very large tepid bathtub. That could bathe a couple of hundred people. And where a couple of hundred people could have peed in - probably had judging by the temperature and the strong smell of chlorine. Did you know that chlorine when mixed with organic particles (eg urine) produces chloramines which we recognise as the strong smell of chlorine? (See I did learn something in organic chemistry 33 years ago.)

But despite the disappointment of pool, it did make a huge difference for the last three kilometres. My wet running kit kept me just a little cooler. And made quite a large puddle on the floor under me at the Regatta where we had a post-run refuel.

The rest of the day was spent hiding in my workroom in the air con with the dogs while the temperatures outside soared.

Today is supposed to be the last of this mini heat wave. I'm hoping we've seen the hottest days all year and I can start to enjoy the new year.
Posted by Char at 1:30 PM