Of Course I Did It.

I did run Owl Trail.

I'd love to be able to say that I conquered it. That I owned it! That I beat it into submission! But honestly it was more a case of me whimpering feebly as I put one foot in front of the other and reminded myself that I'd have to share my failure for the whole world to see if I didn't keep on running. So I kept on running - even though it may well have been quicker to walk. So you can all pat yourselves on the back for getting me up that hill.

I'd kind of remembered how hard and painful the run was but the reality was even more than my fading memories. A little like halfway through giving birth to my third after a five year absence from labour - when there was no way of backing out the situation.

Had it always been so steep?? I felt like I was running on the spot - a little like the octogenarian who tried to go up the down travelator at the shopping centre yesterday. Her little legs were really moving trying to make headway and I can't say that I was sorry when the security man (who I'd cunningly distracted with a stupid question) made her come back down because it was one of the most entertaining things I'd seen in a long time. If only I'd had the presence of mind to whip out my phone and get video. You too could have been impressed with her determination. But of course I didn't so you'll just have to imagine that the bird in this GIF is an 80+ year old woman wearing heels. And that the elevator is a travelator that's going down not up.

And while your brain's doing some creative transposition, imagine that the bird is me and the elevator is a steep hill mountain. Yep, that's the progress I was making. But I was working a hell of a lot harder than that bird. And I'm pretty sure I was thinking more naughty words than the bird too - most of them directed at myself and the state of my sanity.

For the few of you who wanted pictures - yes, I did take my phone but I didn't dare stop to take any photos. Because if I'd stopped then I wouldn't have been able to say that I'd run the whole way to the top. And I'm really not coordinated enough to remove the phone from my pouch and snap off non-blurry shots while trying to navigate rocks, roots and ruts without falling over. I took one photo only - the view from the top with the light streaming from the clouds. The photo doesn't do it justice. 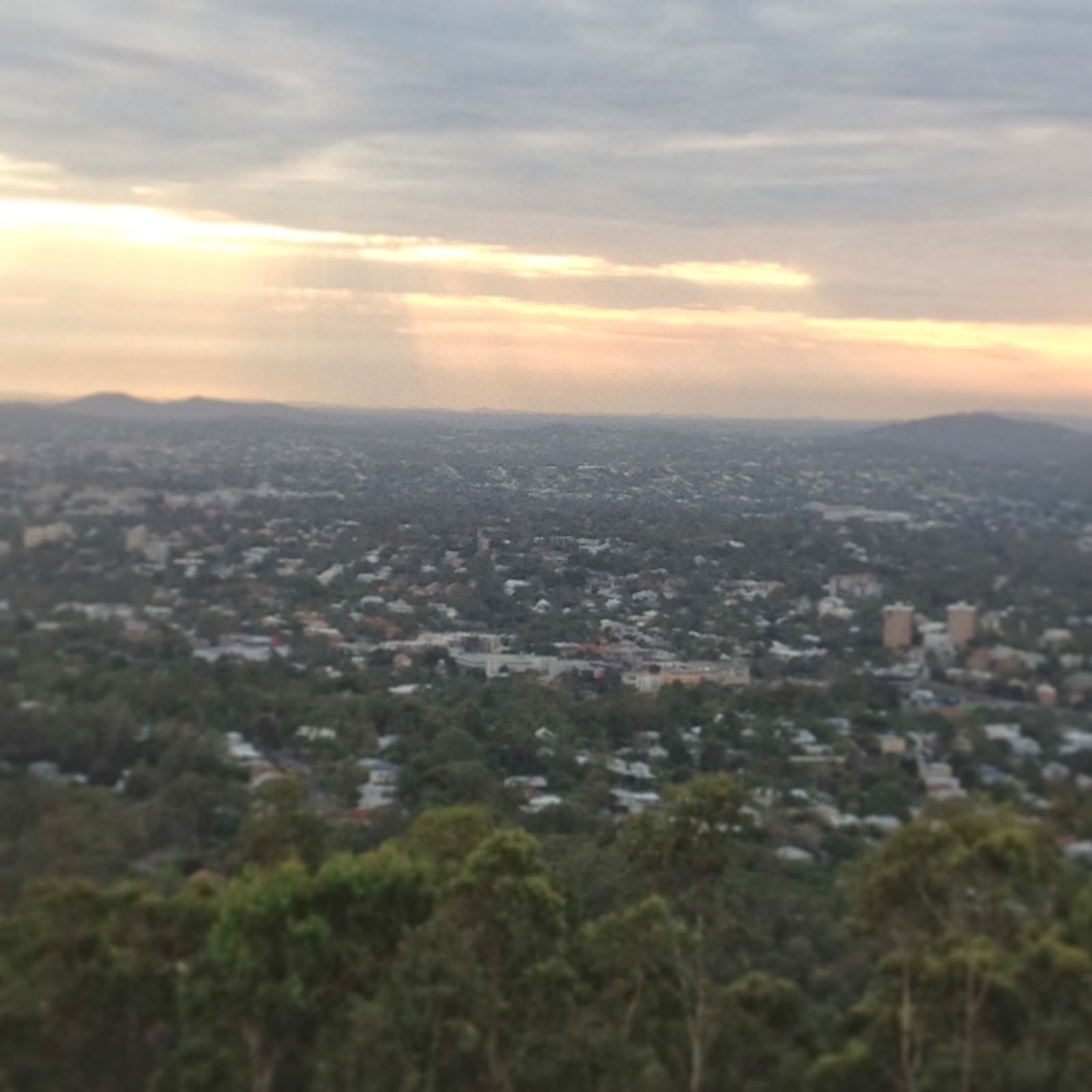 Running Owl Trail wasn't my only win this week. My iPhone lost some of its magical powers the other day. Specifically it had lost its ability to telepathically get information that I need. Really important stuff like how much Serena Williams weighs (apparently 70kg - calling bull$#!t on that) and how old Hugh Jackman is (45) and if he likes older women (well, he's married to one so I'd guess that's a yes).

Not having WiFi connectability didn't seem to be too much of a problem at first. I could still get information via 3G. Or I could sometimes when the signal was strong enough and if I was patient enough to wait for it to download. But on the third day I realised that using 3G all the time meant that my battery was running down really quickly and it was starting to piss me off. My only option was to go to the phone store and ask for help.

I seriously hate going to the phone store to ask for help. It is always staffed by young boys men who speak a totally different language. I speak English and know a few words in German (thanks to the persistence of Miss Murray I can still remember what scheissen hausen means) but I only have a tenuous grasp of techno-speak. Even trying to explain what the problem is is fraught with the very real chance that the pimply young man you're asking for help will roll his eyes at you.

I'd thought long and hard about how I was going to explain my dilemma in the most erudite way possible (without being able to Google how to ask because my phone was taking too long to spit out any answer at all). I decided that the best way to present the problem was that I thought the WiFi thingy in my phone was broken. I'm pretty sure thingy is the technical term for it.

The young boy man who I talked to was restrained enough not to roll his eyes. And his lip did not twitch trying to resist a smile. There was no muffled chortle. So I'm guessing that I was indeed right - thingy is the correct term.

He asked if I'd dropped the phone (no, I hadn't) and if it was running the newest iOS (yeah smarty pants, trying to trick me with your fancy letters - I know what that means and no it isn't running the latest iOS because last time I did upgraded the software my phone crashed and I had to get a new one so now I operate on the 'if it aint broke don't fix it' theory.)

Then he asked if he could try something which worked on his when he had a similar problem. Of course I agreed as long as it didn't involve throwing the phone at a concrete wall or flushing it down the toilet. So he turned the phone off and on and voilà the WiFi thingy started to work again.

I'm calling this a win because my phone is fully operational again but I feel a little bit betrayed by this object that I spend more time with than any family member - even Toby. I'd already tried turning it on and off and it had made absolutely no difference. I'm thinking that it wanted to make me look a bit silly in front of one of its people. I'm also thinking that if I get an offer to upgrade my handset I probably won't hesitate now.
Posted by Char at 6:21 PM