A Cautionary Tale to Anyone Contemplating Buying a Dog

I beat my alarm on Tuesday morning. By just a minute. I'd had my full allotment of sleep without the confused terror of an alarm wake-up. Winning! I just knew that it was going to be a good day.

Tuesday's one of my favourite days of the week. I've said it before and it still holds true. Yes, it's speed session and speed session holds a special kind of hurt but it's one of those sessions that challenges me and I always end up feeling immensely satisfied at the end for putting in a solid effort of hard running. Plus I have breakfast with a friend afterwards where we can talk about running to our hearts content without anyone's eyes rolling back in their heads.

So it was with a sense of anticipation that I got out of bed. I walked into the kitchen, turned on the light and peered through the darkness in the lounge room to get the sleepy morning greetings from the wolf pack when I noticed that something was wrong. A waft of something foul assaulted my delicate nostrils. And was it? Yes it was! Three dark patches on the carpet.

I flicked the light on. Ughhh! Someone had a sick tummy. A really sick tummy. A 'how in hell am I going to clean this slop off the carpet' sick tummy. And how was I going to get it done in the tight time frame before having to leave for speed.

I have to confess that I did momentarily think of leaving it for Iven to clean up. But there are rules in our house. Whoever finds it has to clean it. And because I made up the rule, I really am obliged to keep it. So I set about it. Wads of tissues in hand. Bucket of disinfectant and rags by my side. Eternally grateful that it was our bin pick-up day so that vile, disgusting plastic bag wouldn't be in there for more than a few hours.

I got it all done and was out the door on time. Which did make me wonder why I give myself so much time to get ready normally. I'm clearly capable of getting ready in less than ten minutes, having achieved that benchmark twice in the last week.

The session went well. Breakfast was nice and then it was back home to see if any more liquid brown joy awaited me. I peered into the lounge room with a little fear and trepidation. Phew! Nothing - except the lingering odour of what had gone before. So I decided to open up the glass doors and air the room. And that's when I found it. Ground zero. The plug that had been trying to hold back the tide. Luckily solid enough to just pick up (with a tissue not my hand - I'm not that gross!) and throw into the toilet.

But this was a gift that just kept giving. I flushed the toilet only to have it block. That parcel, so lovingly given a burial at sea, was threatening a resurrection. I grabbed the toilet brush and frantically jabbed and poked it into submission.

Note to self - buy a new toilet brush today!

This tale ends well. The toilet did eventually flush. Iven woke up before me the next day and got his fair share of cleaning duties - a good marriage is all about sharing. Ricky (yes, he was the culprit but who can be mad at a puppy who smiles at you and wags his tail pathetically because he's happy to see you even if he's feeling really sick) is now feeling much better.

Our carpet, however, will never be the same. 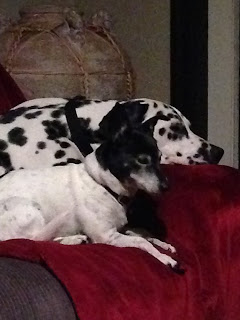 Ah the joys of dog-ownership!
Posted by Char at 2:27 PM