Sydney Half Marathon - Remembering Why I Love To Race

Standing at the starting line of the Sydney Half marathon yesterday I wanted to be anywhere else. I was tired. Dog-tired. Roll-me-into-bed-and-let-me-sleep-for-a-week tired. It'd been a hard week leading up to the race and the timing really couldn't have been worse. 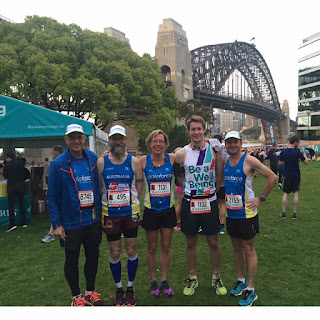 But I was there. With my running clothes. And a race bib. So I guess I was committed. Except for in my head. I told myself that I could take it easy. Just do it like a training run. To be kind to myself. All I had to do was finish and if I finished under 1:50 I'd be happy.

It had seemed like such a good idea a couple of months ago when Josh had said he was going to do it and I'd decided to tag along. A fun weekend in Sydney. A little scenic sight-seeing tour on foot and lots of justification to eat.

Josh hadn't really trained for 21 kilometres but he wasn't unfit. Four indoor soccer matches, a 90 minute outdoor match and a mountain bike ride every week gave him a good base level but he wasn't sure if he'd last the distance. 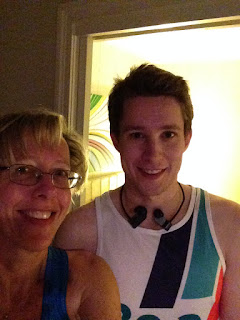 We'd done this race together in 2011 and he'd done a little training for it then. And he'd flogged me. 1:43 on his debut. But he'd also done it in 2014 on even less training and he'd had to walk some. I'd been ribbing him all day before that he was going to be beaten by his mother but standing there before the start I really didn't care. All I wanted was for it to all be over.

The gun went off and we were running. And it felt hard. Really hard. My head was in such a negative place. I was dreading the later kilometres already. It's not good when you're anticipating kilometre 15 when you're only in the first one.

I had to give myself a stern little talking to. I told myself to relax. Don't try to push. That it'd feel easier when I'd warmed up. To listen to my music and take in the sights.

And the sights really were spectacular. Running along the Sydney Harbour Bridge. A beautiful crisp morning. Some blue skies even though we'd been promised rain. I would have been loving it is only I wasn't so tired.

I can honestly say that I hated every step of the first two kilometres. But somewhere in the third I started to feel a bit better. My guess is that it was because we'd stopped climbing and were getting a rest on a downhill. My splits dropped from 5:10s to 4:52 then 4:43 and all of a sudden I could see reward for effort and some of the negativity vanished. Not all, mind you. I knew it was a hilly course so I had no idea what toll those hills would have in the later stages. For now, though I just had to run each kilometre on its merits.


We ran through a tunnel on kilometre 5 and my satellite dropped out and from then on my watch beeped well after each of the kilometre markers. It told me I'd done a 5:15 for that kilometre but I knew it hadn't been that slow. Kilometre 6 was bang on 5:00. 7 and 6 were back in the 4's and we were running through one of the prettiest parts of the run - Mrs Macquarie's Chair - and I was kind of enjoying myself.

I hadn't seen Josh since somewhere in the first kilometre. He'd taken off and looked like he was running so easily. I'd given up on reclaiming the family Sydney winner's mantle. And it kind of annoyed me that he could run so fast without all the training that I was doing. But I was kind of proud cause he's my boy. I kept my eye out on the turn-arounds to spot a tall, extremely good-looking man (of course I'm not biased at all) wearing the official race singlet. It proved a good distraction. There were lots of runners wearing it so I'd pick out a likely candidate in front of me and try to get closer to see better.

At around 10 or 11k I finally spotted him a little way ahead. Still running well and looking pretty comfortable. I slowly ran him down then patted him on the back and told him he was doing well as I ran past. And that's when my competitive spirit really kicked in. Once you run past a rival, no matter how friendly that rival is, you don't want to be passed back.

I won't bore you all with the splits but they were a bit all over the place. I'd have a couple of great kilometres then we'd hit another hill and I'd be back over 5 minute pace again. And the fact that my watch wasn't beeping at the markers didn't really give me any idea of what time I'd finish in. My fastest k was 4:39 and the slowest was 5:27. That one was up a long slow climb which almost broke my will to live. But I knew that after the turn-around (our last) there was a long downhill and I was really looking forward to that.

That 5:27 made me wonder whether Josh would be passing me back at any moment. He'd looked like he was running within himself when I'd passed him and I didn't doubt that he'd inherited my competitive spirit. So once I'd recovered from that effort I was back to pushing hard. 4:49, 4:51, 4:54.

Running under the Sydney Harbour Bridge I could see the Opera House finally. It was still two kilometres away but I knew I had enough to push for home. 4:51. Almost there. Up a ramp, around a corner and there was the finishing line just ahead. I stopped my watch at 1:43:38. 20.95 kilometres - I'd lost probably 200m in the tunnel.

There's a special kind of happiness that comes with running better than you'd thought you could. I would have been happy with anything under 1:50.

I stood around for a little while to see if I could see Josh cross the line then decided to go to our meeting point and as I walked I checked my phone. He'd texted to say that he'd finished and while I was messaging back I saw him. With a new friend who he'd run with for the last few kilometres. 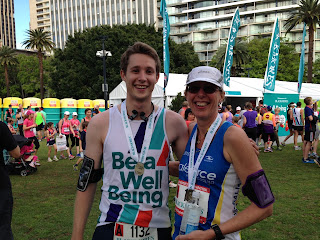 We met back up with friends and swapped war stories then it was back to our room for a shower, to pack and check out.

And then it was time to refuel. 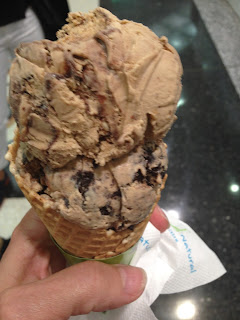 There are lots of reasons why I love to race.
Posted by Char at 3:35 PM