I was really happy with how I ran on Sunday. Really, really happy. But the run wasn't what I was happiest about over the weekend.

I've talked in the past about my anxiety before races. And when I've had to fly. It's stopped me from doing a lot of stuff. I haven't gotten on planes at the last minute. I've missed out on weekends away. I've spent days with a big lump in my stomach not being able to eat properly because it's hard to swallow with that big lump in your stomach. I've had to be medicated to travel. And to stand on the start line of races. In fact my entire trip to Canberra for the half marathon last year was only done with the help of little white pills.

Most of the time I'm fully functional but just certain situations bring out the fear. And it can be debilitating. Try running a marathon or half marathon on nearly no food. And I'm not just talking about the day before. The lack of eating can happen for almost a week in anticipation. Great for weight control but hopeless for a good race.

Last year I had to accompany someone close to me to a psychologist and in our visits the psychologist picked up on my tendency to anxiety. He claimed that he could help so I set up a couple of appointments with him to see if I could get my imaginary monsters under control. We did some work on motivations, gaining perspective and self talk. It was an interesting process but I wasn't sure that it had really helped. I couldn't be until I put it to the test.

And I've put it to the test in race situations quite a few times this year. And every single time I've been able to draw on what I learnt to banish my demons. I can honestly say that I've stood on each start line relaxed. Calm. At peace.

I've come to embrace the joys of carb loading. Something I couldn't face before. For this long-time calorie watcher, having to stuff yourself is a real pleasure. I can talk about the race before hand without wanting to rush to the toilet and vomit. I can be like all the other runners who line up and enjoy the day.

But last weekend's event was a whole different scenario. It was the first time that I had to get on a plane. And I wasn't really sure how my new-found powers were going to hold up.

I'll admit to a couple of mornings where I woke up thinking about the flight. But I was able to manage those thoughts without them escalating. And any time I could that little pinch of anxiety I could talk it away. Not out loud - cause that would make me look like a crazy lady!

What will stay with me longer than the feelings of satisfaction from a race run well, is the feeling I got when my son said "You're usually worried when you fly" after he'd noticed how relaxed I was.

Those sessions that I had have given me a whole new joy in life. Being able to do what you want to do without your head getting in the way is real freedom! 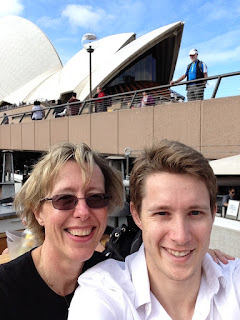 So I guess this post is really to encourage anyone who's had similar issues. A good psychologist can really help in managing those little foibles that make life harder. You don't even have to be as crazy as me to go.
Posted by Char at 2:45 PM