I had an awful run on Saturday. And I fell just a little out of love with it.

I'm not sure why it was so awful. It was slightly hotter but not too bad. I only had to run 20k and not 37 (under physio's instructions) It wasn't particularly hilly. Or stupidly fast. It just felt hard. Even before I'd run 5k.

I kept waiting for my second wind to kick in. It never came.

I kept trying to distract myself - not hard for the first bit when I was being told tales of hospital dramas and running over cats (or possums) which may or may not have already been dead. But definitely more of a challenge on the way home when the running seemed to get harder and harder and longer. I started planning out in my head how many water stops I could legitimately stop at just for another rest.

But in the end I made it. With a lot of support and encouragement. Thank God for running buddies!

But a run like that really messes with your confidence. Especially when you've got a couple of races in the not too distant future. While I was running I was seriously thinking of pulling the pin on them. It's been a good running year - why leave it on a sour note? Especially since it looks like this hamstring thing will be a long-term fix.

Saturday afternoon I moped around, trying to work out what had gone wrong and trying to get some energy back cause I felt so depleted. Exhausted. Drained. I ate like there was no tomorrow. Lots of carbs to help replenish my stores.

Then I woke up on Sunday feeling normal. Energetic even. Wanting to run. I tried to suppress the wanting-to-run feeling. To take the day off as a rest day but I found it way too easy to justify an easy Uni loop seeing as I was only allowed the 20k the day before and it was supposed to have been so much longer.

Late afternoon saw me checking the temperature and deciding that 23C wasn't too hot. I am sorely lacking in discipline when it comes to a run that I've convinced myself that I need. I was in a singlet, shorts and running shoes before Iven could get the dogs on the lead for their afternoon walk - last one out the door has to lock up.

And I was off. Not running, because there's a hill to get out of my street and it's a good excuse for a warm-up walk. But once I hit the top I really was off and it felt so much better than the day before. It was warmer than I would have liked. I had to make a toilet stop. Sweat dripped into my eyes and I couldn't see for the best part of a kilometre. But it was a good run. A sanity-saving good run. And I fell back in love.

I still haven't worked out why Saturday's run was just such a hard slog. Carb-depleted maybe? Although I'd thought I'd eaten okay the day before. It certainly wasn't because of a heavy training week because my hamstring had made sure of that. But it doesn't matter - not since running redeemed itself on Sunday.

I may even have had a bit of this to celebrate. 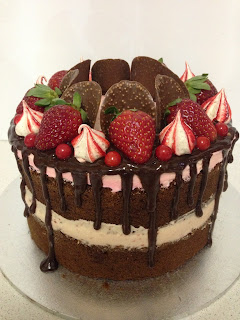