I Can Read Between The Lines

I have been positively overwhelmed by all the loving messages and kind enquiries after my devastating, minor injury the other day. It's been touching and heart-warming to feel all the support from my running and blogging friends. And, surprisingly, it's been a lot of my male running friends that have been sending the messages. Naww. Feeling all warm and fuzzy inside.

Or at least I WAS touched and over-whelmed until I started to read between the carefully crafted messages.There are messages within messages if you're canny enough to read them. And Canny is one of my middles names. Along with Bitchy, Crazy and Without-Filter - a hyphenated middle name is kinda fancy don't you think?!

Actually it was the last message that I received that made me aware that it wasn't necessarily MY welfare that all my friends were worried about.

"How are you feeling after missing your last 2 therapy sessions this week."

Do you know what that really means? Coming from a married man who knows how important his wife's therapy of choice (be it running, chocolate or wine or a combo of any of the above) can be to his own personal well-being. It's actually a desperate enquiry into the health of my nearest and dearest.

That question is basically saying 'Is Iven still alive??'

Of course he's still alive. The man's been my loving spouse for over 30 years now. I did promise for richer and for poorer until death do us part. Oops - that probably came out wrong.

But these are just words. I can give you real proof that he is as yet unharmed from my enforced rest from running. Proof of life. 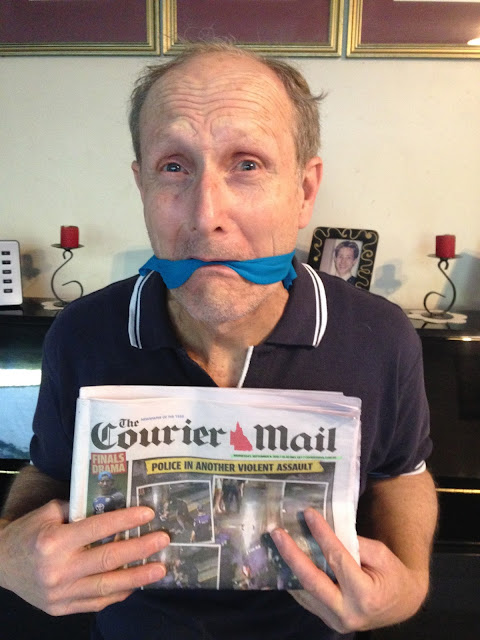 See he's fine. And he's smiling on the inside.

And I'm fine too.

Okay, not totally fine as you might spot from the glaring evidence in the photo. Yes, that's right - the piano has been dusted. In fact the whole room has been cleaned and vacuumed and that would never normally happen on a Wednesday after my 20k mid-week epic. A one hour walk/run with Toby does not make me exhausted enough. Toby, on the other hand, has been lounging around all day after his early start.

But seriously, the hammy is definitely improved from Saturday and my physio has given me permission to run as long as it doesn't hurt and that's why today's walk ended up being a run-walk. As long as I'm keeping a moderate pace there doesn't seem to be any complaints. I'll be running again (conservatively) on Friday then back to the physio to work out what to do on the weekend.

Fingers crossed that I am miraculously healed and I get to run my 37k-er. Or else there may be a very different headline on Sunday's paper.