Amazing is the only way I can describe the group of people that I run with.We come from all around Brisbane and even a little further and we are all different ages, sizes, abilities. But we all share one thing - the love of running.

For the last couple of days I've been down on the Gold Coast for the Gold Coast marathon. The races are held over two days - with the 10k, 5.7k and the children's races on the Saturday, the half and full marathon on the Sunday.

This was a very special event for our squad. It's always the one that most people work towards but this year it had special meaning. Earlier this year we lost one of our runners - a beautiful, talented runner who'd been suffering from severe depression. She was best friends to another of our runners who, along with her husband, was inspired to run the marathon for the first time in Steff's honour and to raise money for Sane - a charity that helps people with mental illness. Quite a few of the other runners hopped on board with her. Yesterday was the culmination of all their hard work.

It was a very excited group of pink-clad runners that were at the GaleForce tent at 6:45 yesterday morning. Pink was Steff's favourite colour and I must say that everyone looked very special. They'd trained together and they were planning on running together. Andrew had his phone with him and was updating us via Facebook and phone calls to his wife. We wouldn't be seeing them until they ran past at about 32k.

It's a long morning, watching a marathon. We amused ourselves on the sidelines chatting, eating, cheering, mentally rating the shirtless runners into the 'should' or 'shouldn't have' categories. Some of the squad had headed down the course to let us know when our runners were coming. And finally they were. Their plan to stick together hadn't panned out. But none of the virgin runners was running alone. 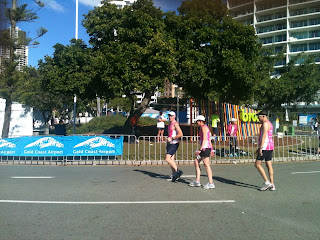 An hour or so passed and a lot of our runners came past for the second time. And each was cheered on raucously. We heard from Andrew that he, Simon and Heather were still a way off so some of the cheer squad headed up the course to help bring Heather home. It was a strange, pink procession that came chanting their way up the course towards the finishing line. Heather was probably a little embarrassed to have so much fuss made but all I saw was friendship, respect, support and an individual sport becoming a team sport.


That was probably the best moment of the weekend for me but coming a very close second was seeing Jenni and Brett, the couple who'd inspired so many of the group to run and helped raise almost $6000 for charity, running to the finish line together. You guys were amazing!

And the third best moment was my own race on the Saturday. I'd nominated to run in the 50-60min and all I wanted to do was not make a liar of myself. I ran a 9 minute PW and I was as excited as the day that I ran my PB. Net time - 55:28. It's so great when you exceed your expectations! 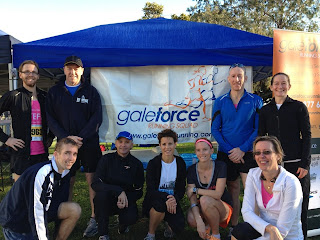 
PS - My guest post on how to make these is up here. 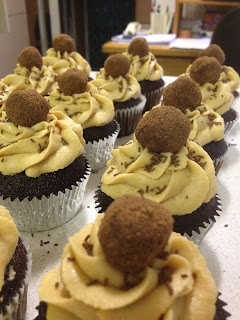