I'm all into amazing and astounding this week. First of all I complete a half marathon in a way better time than I'd anticipated. And then this ... I cleaned the pantry! I know, I know two incredible things in one week is almost too much to comprehend but I'M pretty incredible at the moment so you're just going to have to live with that feeling of inferiority.

Admittedly I haven't cleaned the pantry since we fitted the new kitchen. And I can't even remember how long ago that was. I'm guessing about three years by the use-by dates on some of the packets I found in there. That's actually quite an improvement from the last time I cleaned the pantry where the kids were exclaiming in horror at how old some of the packets were (a decade in some cases) and in fascination at the olden-day food.

Housekeeping is not one of my fortes.

And I'm not sure even now why I came to clean yesterday. Could have been the hang-over of half marathon endorphins. Could have been delusional fatigue from running 61k that week (yes, it should have been a rest week but I wasn't that tired and I can rest when I'm dead). Or it could have been that the power of leadership had gone to my head and confused me. Coach Chris had been away for our long run yesterday and had left me in charge - I'm guessing because of my awesome leadership skills and authoritative air OR because he couldn't get anyone else to do it.

Actually the real reason that my pantry is today pristine is because of a conversation that I had during the run yesterday. A conversation where I finally set a date to have a little cupcake master-class of one and knew I'd be mortified if anyone saw the state of my pantry. Shame and pride are powerful motivators.

So for two hours yesterday I pulled out foodstuffs, dusted off cobwebs (I worked out why spiders like to live in my pantry - it's to eat the moths that have infested my really old food. The circle of life is an amazing thing), scrubbed shelves and marvelled in my total inability to keep tabs on how much stuff I have.

How does over 12 kilos of sugar sound? Excessive??!! Probably not if you're setting up a bakery but I'm not planning on that in the near future. And it was a variety of sugars - white, brown, caster, palm and icing.

And what about this? 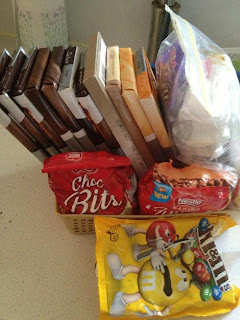 The little area where I keep my chocolate supply was (I'm truly sorry for this - the worst pun ever but it's so bad I can't help myself) chock-a-block. Yes, I'm the reason that there's a world-wide chocolate shortage. I'm preparing for Chocolate Armageddon where only those with chocolate baked goods will survive the apocalypse (yes, I've been going to too many sci-fi flicks with my husband).

The chocolate corner (better known as the very-naughty-but-oh-so-nice corner) was a little heart-breaking to clean up. I found no less than six peanut M&Ms that had escaped their packets and their ultimate fate of being devoured in an M&M binge only to fester in unknown filth on the shelf. And despite my overwhelming love of these chocolates, even I couldn't bring myself to eat them. Toby is now quite a fan.

I learnt a lot yesterday - apart from the facts that I'm a horrible housekeeper who hordes.

1 - I found out that an easy way of telling whether something is too old (because finding use-by dates which have faded is a little tiresome) is to check for life in the packet. If it wriggles throw it out.

3 - And I should really keep my peanut M&Ms in a jar to stop escapees and the disappointment of having to share them with my dog (my disappointment, not his). Or I should just eat the entire pack in one sitting.

Today I plan on cleaning up the lower cupboard, cans and sauces. If you hear of any explosions in Brisbane there's probably no need to fear a terrorist attack - I'll have dropped a bulging can.

And because I've left you dangling long enough, I thought I'd better mention my B.A.D.

I want to do another marathon. Next year. I can't explain why I want to do this - but I had two more children after I'd found out just how painful childbirth is so obviously there's a little insanity linked to this desire. I have three options that I'm considering. Canberra in April. Gold Coast in July. Or Melbourne in October.

A friend is doing Canberra and I've never had a medal from there but I'm not sure if it's too soon and the course is a little hilly. I'd have someone really nice to train with but it's my busiest work time of the year.

Gold Coast is flat but I've heard it's a really boring course. I wouldn't have to travel to do it (a one hour road trip doesn't really count as travel) but I do have to run the 10k the day before because it will be my second last.

I've done Melbourne before. The course is great - scenic and pretty flat. The weather is usually pretty good. But it's a really long way off and I could lose motivation.

One thing's for sure - I will be having a conversation with Coach Chris in the next couple of weeks.
Posted by Char at 3:54 PM