Get set for at least three months of me whining about the weather. It will probably be more like four or five months - since technically I had a couple of little whines already this month and summer can last all the way till March or April.

I hate summer! I know some people love it. I will never be included in their ranks. What's pleasant about sweating every time you breathe? When your heart rate elevates just by getting out of bed. And when every run leaves you in an exhausted puddle on the floor.

Yesterday was vile. It was one of those sweat-all-the-way-through, never-get-below-24 nights. You get up just as tired as you've gone to bed. It also happened to be LSD day and I was going to run - a short long run.

I'd told Coach Chris all my woes during the week. And he was happy for me to cut right back this week and see how things improve. I hadn't run Thursday (except down the hill when I took Toby for a walk) and I was definitely feeling better but there's always a little fear that I might be doing the wrong thing. That I should have another couple of runs off. I told myself I'd only go 8 k - 10 k at the max. That I could walk if I had to (I don't know who I'm trying to fool with that one. I hate to admit that I'm struggling and walking is a huge admission.)

So we set off at 5:30 am in awful heat (for that time of the day). Started sweating in the first 500m. Heart rate was higher than I was happy with (yes, the heat and humidity had something to do with that). BUT I ran the whole way of my 10.5k (apart from a few very necessary water stops). AND I didn't feel sick afterwards. Little yay! I think I took my rest exactly when I needed it.

I'm resting again today - and actually won't be running till Tuesday's speed session (unless it's down the hills with Toby or to get out of the way of a speeding car. Don't laugh, it could happen). I'm feeling like I dodged a bullet and it's reinforced to me that I need to take a cut back for a week every month. Just a week where I pull back on the distance and number of sessions to consolidate my gains.

But back to yesterday. We'd been promised a storm. I say promised because I love a good storm. I love feeling of the wind come up after I've been suffering all day in the heat. I love hearing the rolling thunder. Seeing the lightening flash across the sky. I just love the power and might and majesty of it all. And we'd been promised a Superstorm. 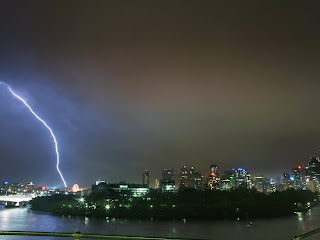 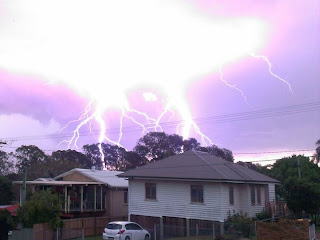 There was quite a bit of damage around the city so I'm grateful that no one I know had any problems. I'm also grateful for the amazing massage my sister gave me (while the storm was raging) that put me to sleep for two and a bit hours.


And while we're on the subject of gratitude I'm also grateful for these. 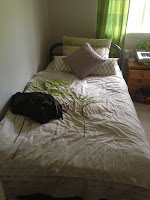 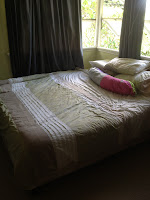 At first glance there's nothing unusual in these photos but when I explain that these are the two beds that are left perpetually unmade. See, little things make me happy.

So even thought there was a little speed bump in my life this week, it's all ended up on a good note and I feel like I'm on track again.
Posted by Char at 2:51 PM