I've Got A Secret

I've had a secret this week. It's a good secret not a bad secret and it's been hard not to tell the person who it most affects. But the secret's out of the bag now and I can tell everyone.

A couple of months ago Josh (#2 son) met a girl that he really liked. They went out a bit but she had to go back to Taiwan to finish her study. But then she decided that she didn't want to continue the degree she was doing. Brisbane seemed a much more attractive place to be so she made plans to come back. She and Josh became Facebook official and the date set for her arrival was the 24th of November ... or so Josh thought.

I got a message from Serena early this week to say that she was actually arriving on Friday the 23rd and wanted to come over to be here when he got home from work to surprise him. Yay! I love being in on surprises. So we worked out how it would all happen.

The waiting and not being able to say anything was hard. I kept asking how he was feeling about Serena coming back ('excited') and what time she was arriving (10am Saturday) and, most importantly, was he coming home straight from work on Friday and not going out with friends (thankfully not).

Serena arrived at about 4:30 and Josh was expected any time from 5:30 to 6:00. So we had a cup of coffee and a cupcake and chatted a bit then she helped me with dinner. And then we heard his car (not hard with the sub woofers he has ). Serena quickly hid her belongings and went and hid in his bedroom.

Josh walked up the stairs in a pretty good mood and after the usual greetings told us he was busting to go to the loo. As he rushed past me I casually mentioned that he'd got a parcel that day, quite a big parcel, and I'd left it in his room. As he sat on the toilet he pondered loudly on what the parcel could be. He couldn't remember ordering anything big.

He finally flushed the toilet and I was sure he'd go straight to his room BUT Serena's phone, which she'd left charging in the lounge room went off. I tried to head Josh off at the pass but there was no stopping my curious boy. He found her phone. And her bag. But still the penny didn't drop and the confused look on his face was priceless. "What the??"

I still don't know whether he knew what the 'parcel' was when he finally made it to his room. But I could hear how happy he was. 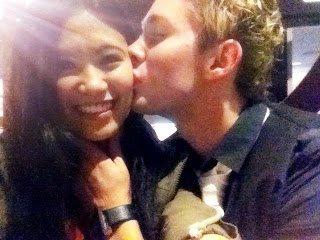