Yesterday I wrote a post that was absolutely rubbish. Sometimes if you really have nothing to say, it's better to keep your mouth shut. So I deleted the post. Today's post is bound to be way better because so much has happened since last night - if you count sleeping.

Yes, that's right I'm sleeping a little better. I fell asleep reading my book last night and stayed that way (apart from a very early call of nature) for nearly 9 hours. The night before was 8. Certainly beats the 4 hour mini naps that were passing as my night's sleep a week ago. (See I told you this post was going to be way better - sleep is always such a riveting topic)

I took yesterday's run off. I know! It's only week two of my PMS but I wasn't doing so well. It's my own silly fault too. I'd almost decided not to run on Sunday after being so tired on Saturday's run. But I slept okay Saturday night and was feeling pretty good. So I did what any obsessed runner would do, I ran. But my mistakes were in running 4 hours after when I'd normally start (it's nearly summer - what was I thinking - oh that's right, I wasn't) and running the distance that I hadn't completed the day before. My rationale was that I was supposed to run 12 k on Sunday and 16 k on Saturday, what did it matter if I changed them around?!! Well it wouldn't have mattered normally but we all know that my body doesn't behave normally and I was already circling the drain the day before.

So I set off towards the river. It hadn't seemed windy at home but it was along the water. There were even white caps. It was a headwind and I thought to myself that at least it would be behind me coming home because I was running a loop. But it never did. It seemed to change direction so I'd always be running into it apart from one short section. At times it got so strong that I felt like I was running on the spot. And at other times I was so over it that I just walked - which kept me out in the sun longer.

I got home really tired about two hours after I started. And I was sunburnt. I never put sunscreen on to run because I run so early but when you run after 9am it's a different story.

I was tired for the rest of the day and still tired on Monday. And yet I still did speed on Tuesday and that's when I knew I really had to get serious about letting my body recover. My legs were heavy, my heart rate was high and I spent the rest of the day feeling sick and the next day as well. Major wake up call!!

But the stakes are too high. Every time I get sick it takes longer to get better and I come back slower. So I knew I just had to back off before (hopefully) it was too late. Week 2 of my PMS might be a fail but it'll be better in the long run that I listened and acted.

It's all good and I'm not upset - too much. How can I possibly stay upset when there's this to greet me whenever I get home. 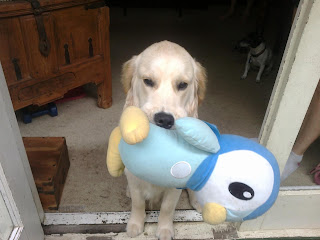