I've finished my first week of my PMS (preparation for marathon schedule) and I'm prepared to be totally honest here. It sucked. Big time. Well, I sucked big time. I felt tired. My legs were heavy and I was slow. How's that for a first week?

I think there are a few factors involved with my week of suckage. First would be my lack of sleep. I'm averaging between 3 (on a really bad night) and 6 on the less bad ones. Saturday night was my one bright shining bed-light for the week - 8 hours!! One good night sleep doesn't make up for six bad ones, though.

Changing my diet may also have had an effect. I'm a bit unsure as to what I should and shouldn't eat at the moment. I've pared it right back in the hope of getting a happy tummy and then plan to introduce back different foods to see which is the cause of my internal unrest. So far, so good - the fart index has gone down significantly.

No longer are the neighbours complaining about the trumpet practice that happens any hour of the day or night. They were starting to wonder if Anzac Day was close because they were sure it was a very bad rendition of the Last Post. The high G was only reached with a potent cocktail of milk and beans with a chaser of cabbage.

Yesterday my TFC (total fart count) was only 13!! My kids are so proud of their Mum.

I've cut a lot of wheat products from my diet as per Dr Fart's recommendations and even baked my first ever batch of gluten-free/wheat-free cookies adapted from my favourite cookie recipe. They don't taste too bad either.

I think, though, that the biggest factor in the Dyson-like training, is the fact that I have run 4 weeks of over 50k/week. This would have been the norm last year but this year has been far from normal and I guess I shouldn't expect that I can run that sort of mileage without paying the piper. So I WILL be taking Thursday off. Maybe Sunday too if I need it. I have to get back to basics and listen to my body, not get  so caught up with the training program that I will suffer the consequences.


But onto happier things. Luke turned 19 yesterday. I have only one child left in his last year of teenage-hood (is that a word?). How did I get to be this old?

Lucky Luke didn't get to celebrate his birthday yesterday. It's hard to celebrate when your birthday is overshadowed by an enormous exam the following day. But I did make cake - because what is a birthday without cake? 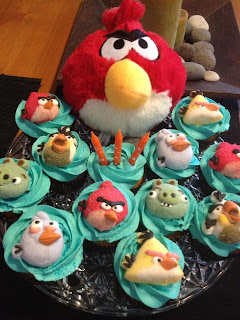 And why the Angry Birds? They were angry because Luke's birthday was in the middle of the exam period. His exams are done as of 10am this morning so tonight we celebrate.

Just one final note. To the man who was behind me in the supermarket queue telling his friend how he managed to avoid getting sick a lot - yes we all could tell that garlic was the biggest weapon in your arsenal. No words were needed.