LSD, PMS and The Sweet Taste of Failure


It's raining today. Full-on, all-through-the-night raining. But it's Saturday and Saturday is LSD and it's the first week of my Marathon Training Program or, as I prefer it to be called, Preparation for Marathon Schedule (PMS for short). It was incredibly tempting to just stay in bed - especially because my sleep patterns are as bad as they were last week and I'd hardly had any - but I'd taken
my teaspoon of concrete. There was going to be no piking today.


While I was getting ready I had the computer on, checking email, post comments and Facebook and I found this. 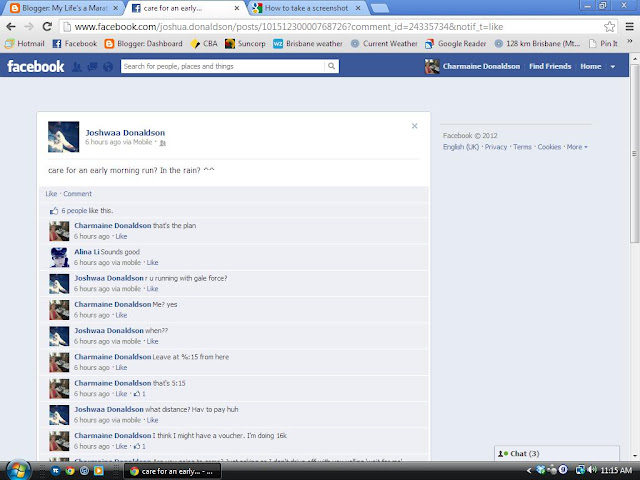 For the more observant of you - no, I didn't know how to take a screen shot until today but I'm a great Googler.

Even if I'd had second thoughts there was no getting out of it now. Especially after one of Josh's friends called me motivated. 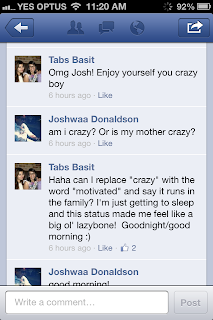 It was a small group this morning. The rain had washed away quite a few of the group's motivation to run and had replaced it with the motivation to sleep in. But there's nothing much better than running in the rain. Well there are a few better things - chocolate, a good coffee, a good night's sleep, having a cuddle with my puppy and running in the rain on a FLAT course. That's right! Coach Chris had decided that seeing as we'd made the effort to get out of bed, he would torture us with the undulating course we'd done just two weeks ago.

It felt hard!!! Hot, humid and hilly was not how I was wanting to do my first LSD of my PMS. Usually I have my Garmin on the general screen which shows time, pace and distance but for some reason I put it on the heart rate screen and the numbers I saw were quite alarming. I'd almost decided that I was heading back to being unwell again. Luckily (for me and not him) Josh's knee was a bit sore so he wanted to walk at about the 13k mark. And being the wonderful, caring mother that I am, (see #2 on the post from 5th Nov - the nipple ring incident)  well I couldn't just leave him hobbling back on his own. Could I?!

I got home and loaded up all the data from the run then compared it to the run two weeks ago and surprisingly the stats are nearly identical. Today's run felt harder but I think that may be to do with the lack of sleep beforehand and because I could see my heart rate as I was running and it was freaking me out a little. Note to self - never have the HR screen showing when you're doing a hilly route. Your heart rate will be high so there's no need to get upset about it while you're running. Much better to keep that till after the run. 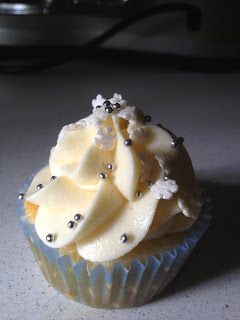 This is my first mega Pinterest fail!! I've baked a few of the ones on my board and this one looked particularly awesome so I set it as my Friday Cupcake Challenge. Not sure why it failed but I'm still trying to work out why there was almost half a cup of sugar still on the bench  after I'd put the cake mix in the pans. I'm pretty sure it was just a dud recipe. That mound of icing is hiding a hole the size of the Grand Canyon (and no, I'm not the type of person who exaggerates for effect). They're still disappearing pretty quickly so I can only assume that sometimes the taste of failure can be sweet.