Yesterday I couldn't wear my ring. Yay! Fluid retention! Admittedly it was also a warm day and I'd been for a run but it didn't get any better through the day. Ironic that the ring Iven bought me to cheer me up after feeling so sick from the pill I can no longer wear because I've gone off the pill. I'm sure it's only temporary or I may have to end up ordering a dialling wand to make any phone calls.

For well over a year I've been having some problems with blurry vision. It was always worse after I'd spent time doing close-up work like sewing. I sewed all day Wednesday and could still see well. Or as well as someone who's as myopic as me can see. I'd put the blurriness down to getting older. I was wrong.

Yesterday's run went better. I did a route that I can add to if I'm feeling good but it has a couple of hills. I ran two out of the three hills and added the extra distance. Enough said.

Then yesterday evening I had enough energy to take Toby for a walk, which turned into a walk/run.

I haven't had a cramp all week. I was getting foot cramps whenever I pointed my toes, which I do a surprising amount of times - it must be because of my unrealised dream of being a ballerina (from when I was about 7). And I'd had a very awkward calf cramp one day while I was holding the clutch in at a red light. I can point and clutch as much as I want now.

Apart from the fluid retention, the only negatives so far have been a propensity to cry very easily, a couple of pimples (I'm going through puberty again and this time I'm coming out a man) and a minor headache every day. Hey, I can live with that!

One thing's for sure - I'll stop treatment before it gets to this point. Imagine the chafing between the thighs after a long run. 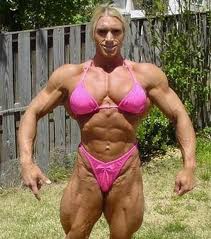 Toby wasn't his normal self on his walk yesterday. I had to do a lot of coaxing to get him around our normal route. It was warm and I wondered if he was suffering too much under his thick coat. And then I wondered if he was nervous because of his recent dog attack. We'd run into a Staffordshire terrier early on the walk and Toby hadn't been too worried, although he wasn't quite his normal friendly self.

I managed to keep him walking and as we headed up a narrow path I noticed a rather large man with a very tiny dog (What is it with big men and small dogs? It just doesn't seem right. And no I'm not judgemental ... much). Then man had pulled over to the side so we could pass - or so he could take in the beauty of two blondes in full flight (cue self-deprecating laugh). But Toby wasn't going to cooperate with the full flight part of the scenario. He took one look at the tiny dog and stopped dead. I asked the man if Toby could say hello and he said it would be fine so I tried to coax Toby over. Toby wouldn't have a bar of it. There was NO WAY that he was going to get close to that 2 kilo poodle. My thirty kilo dog was terrified! The dog attack has scarred him in more than just a physical sense. 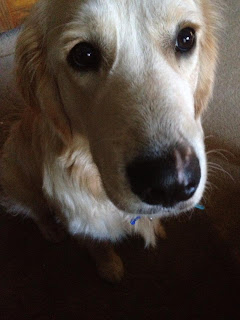 You're sure it just makes me look more ruggedly masculine? Maybe I should try a concealer - pass the permanent marker.

I felt so bad for my baby. And continued to feel bad all the rest of the way home. I was convinced now that his fears were the reason for him being so reluctant at the beginning of the walk. But that didn't turn out to be true. I found out the real reason when I got him home and he ran straight out into the back yard to make sure Bubbles hadn't finished his new bone while he was away.

A Golden Retriever who's ruled by his stomach? Who'd have ever thought it?!!