A Crisis, Lots of News and a Give-away

Thank goodness 2012 is finally over. It didn't go out without one last little sting to its tail. There was a near disaster averted. I went shopping with my eldest yesterday. He had a gift voucher from Christmas that he wanted to use to buy himself a treat - new socks! I had to leave him to it for a quick toilet visit and when I came back I realised, to my horror, that he had a bundle of socks that were EXACTLY THE SAME as his brother's. 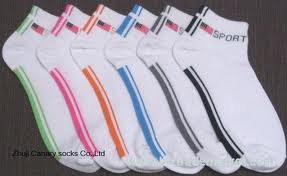 A little over-dramatic? Not really when you're the one who washes and folds the laundry and puts them into appropriate piles. Not when your sons all wear the same size clothing (mostly) right down to their socks and jocks. Sometimes getting the right clothes into the right piles can be traumatic. And it can be downright impossible if two people have the same things.

So far I've managed the laundry situation by making the boys buy clothes of a certain colour. Sam wears mostly blue and black undies. Josh goes for brights and Luke mostly has patterns. Sam bought himself some tropical print ones in bright colours and they ended up on both Luke's and Josh's piles.

Christmas gifts add a whole new level of indecision to my laundry sorting. When the Aunties and Grandparents give shirts it takes me weeks to get it right. If I was smart I'd photograph the new ones and put a cheat sheet on the wall. But I'm not that smart or that motivated.

Luckily I made it back before he'd gotten to the checkout. Crisis averted!

2013 has started off on a good note. It doesn't get much better than a really good night's sleep that's so deep that you don't even hear the fireworks go off at midnight. Actually, it does get better ... when you start the brand new year with a nice 10k run.

The roads were almost empty when I left home just before 6:30 am. It was warm but not hideous. And it was just so peaceful. There's nothing much better than running on a public holiday. I saw three other runners, six cyclists and two hardy dog-walkers.

And talking about dogs, Toby's learning a new trick for 2013. It requires enormous restraint for a dog who is obsessed with food but as food's the reward, he's happy to give it a go. Hopefully I'll soon be posting a successful catch off his nose. 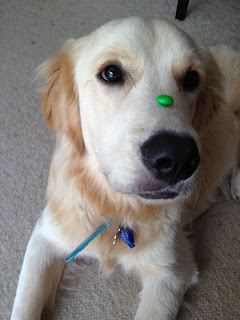 And on the topic of new tricks (how's that for multiple segues?) I'm trying a new trick myself. I'm doing my best impression of Oprah and giving away some free stuff! Admittedly it's something that I've made myself - yay for home made free stuff!! I'm going to give away either a pair of children's bathers, a running crop or a pair of tights (male or female) of your choice. 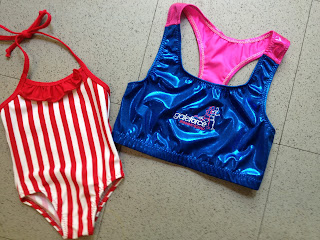 All you have to do is become a follower (or already be one), like my new Facebook page (another first for 2013) and let me know you've done so in the comments. And spread the word - you never know I might get generous and give away more than one prize. Entries close on the 15th of January which is, coincidentally, my first day back at work.