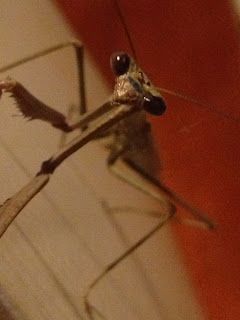 Cute little fellow isn't he?! I thought so but my first-born was reduced to waving the white flag (or rather, tissue) after a little encounter with him last night.

Me and the religious mantis here were having a lovely bonding session in front of the tennis last night (where our boy Tomic beat world #1 Djokovic - woot!). He was exploring and doing Zoolander's Blue Steel and I was playing paparazzi when Sam came into the room.

Sam and The Mantis did NOT take to each other. Sam got all freaked out that The Mantis was going to fly at him. Luckily he stopped short at actually squealing like a girl. The Mantis took Sam as a threat and proceeded to follow Sam's every move. Sam moved around the table. The Mantis did his best Carrie impression.

Sam got a little too close and The Mantis went all Karate Kid on him (minus the blood and the beheading).

Luckily Sam didn't have as an extreme reaction as one of my arachnophobic running friends. 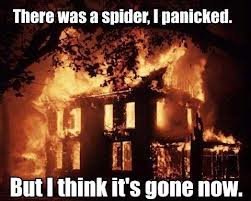 He picked up a tissue, waved it in front of The Mantis to make sure he was good and angry then picked it up and flung it outside. I wonder if he'll be nominated for a bravery award.

I probably should be nominated for an award too.

My new iPhone arrived today. Remember how my old one had been throwing hissy fits a few weeks ago which ended up in me getting all confused about geek terms like backing up and synching. Goodbye all the contacts on my phone and my Christmas shopping list and many other useful and important bits of information. There was a day of mourning in our house.

I'd spent a fair bit of time on the phone that day with a lovely lady called Marianne. And the reason that she was lovely was because she offered me a phone swap even though my phone was out of warranty (by three days!). I didn't take her up on it because my phone miraculously started to behave itself while we were still talking. I think it was the fear of becoming obsolete and maybe being stripped for parts and ending up in an iPad.

Just last week the fit-throwing started up again. Do you know just how frustrating it is to be trying for your high score in Sudoku with the screen lagging and the phone shutting down in the middle of it?  And there were a couple of conversations that were cut short when the phone deemed that they were probably too boring to be part of. (Sorry Coach Chris but when you said that nothing much had happened the phone just made a judgement call.)

So I decided to contact Marianne and take her up on her offer. And today I got the dubious pleasure of trying to get all my information from one phone to another without breaking anything, throwing a tantrum or sitting in a corner, rocking.

At this point I'd like to remind you that I'm almost 50 and these hand-talk-box thingies weren't invented when I was in my formative years. "You have three sons," I hear you say. And yes I do, but they mock my iPhone - treat it with the scathing derision that's usually reserved for Glee night. And they're rarely home. And if they're home they're usually asleep. So I knew I was on my own.

I'm happy to report that my new phone now holds exactly the same information as my old phone AND all the apps are in exactly the same spots. And it only took me about an hour to nut it all out. And I took no calmative drugs at all in the process - either before, during or after.

Do you think that testosterone cream has magical geek powers?