The Ghost Of Simbas Past

First up I want to state that I don't hate cyclists. Well, not all of them. Sometimes I hate the ones who blow past me at a 100k/hr on the bikepath and miss me by millimetres. My husband is a cyclist and I don't hate him despite some of my homicidal plans. I just sometimes like to 'have a go' because that's Australian Kulcha.

The truth is that while I can cycle, most of the time I'm too scared to do it on the roads or where there's other bikes within a ten metre radius or where there are small furry animals off their leashes. (I still have nightmares about a certain bike vs poodle incident) And I can't use gears. And I ride with my hands poised over my brakes. I just wonder how cyclists get their endorphins when the weather turns foul. If I don't get my hit, I'm the one who turns foul.

Anyway, on to other issues.

I woke up to an eerie, foggy street yesterday. There had been rain predicted but those winds had moved it south quicker than expected. 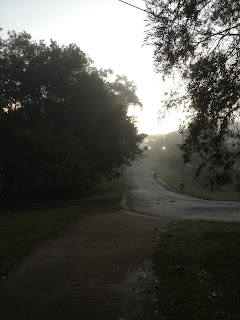 And within two kilometres of starting I got to see something that I hadn't seen for a few days. The sunrise was glorious through the clouds. 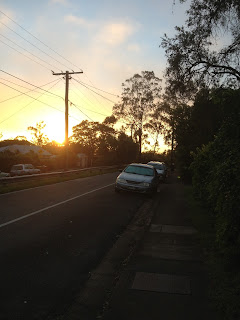 I ran my loop through the university to check out the damage but apart from a lot of leaf litter and branches, there really wasn't too much. The tree that had come down the day before had already been moved. 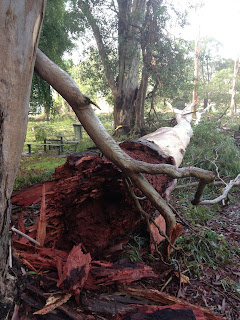 Not so the one in my local park. This might be there for a while until the council gets more important jobs done.

But having the sun come out after all that rain means only one thing - humidity. I've been feeling a little like I've been put in a steamer and left on the stove for way too long. And worst of all, my hair does not do humidity with any grace whatsoever.

I know that my be-curled sisters despise this weather because it makes their head look like a pom pom. But spare a thought (and a prayer) for me and my limp-haired compatriots. Humidity past 50% means that my hair is glued firmly to my scalp and no amount of product will give it any lift. Add to that the fact that I'm a good three weeks overdue for a hair cut and I'm seriously thinking of a ponytail - it would be all of 3 cm long and stick straight out but I swear it would be no worse than how it looks at the moment.

Having at least a week of bad hair days to look forward to is only the start of my woes. The city might run out of water. Our main treatment plant has become all silted up because of the flood waters and might take a couple of days to get back up to full operational capacity. We've been asked to keep water usage to essentials.

Minimal water plus hot, sticky weather is not a good mix. I'd like to suggest now that if you're planning on visiting Brisbane in the next 48 hours you might want to carry a nosegay. For all of you who weren't raised on a diet of Georgette Heyer, a nosegay is a little posy of fragrant flowers that you stick under your nose whenever a stinky person walks by. Back in merry old England way before deodorant and regular showers, this was a must. I'm thinking that we could start a new trend.

But again, the threat of imminent dehydration and a stinkfest to end all stinkfests is still only the tip of the iceberg.

The worst thing about this whole situation is what I want to refer to as "The Ghost of Simbas Past".

We have not always been a dog-only family. The chicken doesn't count in this story because it produces eggs and is therefore less of a pet and more of a supermarket on legs. Once, or twice (or really three times if I want to be brutally honest) we owned a cat.

Most people are either cat people or dog people. Some are both cat AND dog people - they're like the ambidextrous of the pet-loving fraternity.

When Iven and I had just married, we lived for a while in a unit where we couldn't own a pet. But all cat lovers know that you don't OWN a cat - they own you. And I was a newly-graduated vet who needed a pet for my very existence so I let a kitten adopt me.  But it was not a terribly happy relationship. I would feed Smudge and she would attack my ankles whenever I walked past her. I would clean up the litter tray and she would bring in rotting bits of road kill or cat kill. I would shower her with pats and affection and one day she tried to kill Iven and I in our sleep by turning on the gas stove.

Cat number two, Goober, was a much nicer feline. He actually liked humans. I personally think he was raised by dogs but this proved to be his downfall - his life was cut short when he tried to chase a passing car like any normal dog would.

Cat number three was the product of an incestuous relationship between mother and son. My sister's cat had kittens and they needed a home. This was not long after our kids had seen the Lion King and we ended up taking Simba off Fiona's hands. He was cute as a kitten but adventurous as a cat and a ruthless killer.

His adventurous nature led him into a slight altercation with a car and a fractured pelvis. The pelvis healed but that part of him was never the same. He became chronically constipated - ughh! And it was only made worse by eating everything he killed. Fur and feathers are guaranteed to block you up (useful tip to those runners who suffer from runner's trots). And no amount of paraffin oil or Catalax would unblock him. He always stank! And he'd often leave little brown offerings around the house.

All three cats used to use a dirt area under our house as their litter tray. And whenever we've had lots of rain that lovely aroma of cat pooh wafts through the air. It evokes lots of memories - and reminds me why we're now a dog family.

Besides a lot of people already think I'm a little crazy - I don't want my name in the same sentence as crazy and cat-lady.