A conversation with my Mum a couple of days ago started a flow of thought in me.

We were talking about board - how much I charge the boys and how much she used to pay way back when. Way back when was before Australia moved to decimal currency. Mum was paid the grand sum of twenty pounds a week and she was expected to pay five of them to her parents. But she admitted to me that she had a weakness for fashion and occasionally her board would be late because of a beautiful dress.

It got me to thinking about my own financial history. I'd gone from being a poverty-stricken student living from home on an allowance that Dad sometimes remembered to give me, to being a poverty-stricken newly-wed then new Mum with a mortgage. I'd done a bit of part time and locum work as a Vet after I'd graduated but once the second child came along I gave it up to concentrate on being a Mum. But Iven wasn't in a very highly paid position so to help make ends meet I started sewing for people and eventually created a business making sportswear - not a lucrative business but enough to pay the groceries and some extras.

All my married life money has been for necessities - food, electricity, clothes, mortgage and the kids. We wanted our kids to have a few opportunities so they all got to learn an instrument, learn to swim and play club sport. There was never really any decisions to make about money. If there was anything left over it went towards the mortgage. We didn't really have holidays - certainly not regularly - but I never felt like we were missing out. I'd never had a time where I'd been able to frivolously spend money on myself.

I was reading a Deb's latest post, Rich Man Poor Man, and it consolidated more of my thoughts on the matter of wealth. And then today I was reading Born to Run. It's about runners (how's that for stating the obvious)- a tribe in Mexico that consider running a birth rite and ultra marathoners - crazy obsessed people by most of the world's yardstick but people who love what they do. 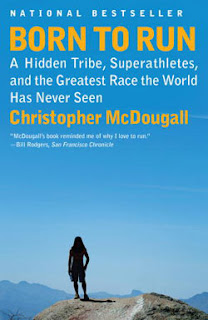 What struck me was how rich these people considered themselves. They didn't need to be burdened with things. All they needed was trails, mountains, rivers and trees and the time to explore. Their wealth came in the form of relationships and the simple joy that comes with doing something you love.

And that's exactly the reason why I feel that I'm wealthy. It's not the multi-millions of dollars that are in the bank - believe me, it's definitely NOT that. There's enough to pay what needs to be paid with a little left over. My wealth is my family, my friends and being able to run.

Last night all of my sons had their girlfriends over. This morning the house was full. My heart was full. Last night I had coffee with a close friend who I can share anything with. This morning I had coffee with another close friend. We talked. We laughed. And I feel rich. Another dear friend has just become engaged and has asked me to help a little with the wedding. I don't have any daughters and to be able to help her has made me feel like I haven't missed out. Yesterday I struggled through a very unpleasant 16k in the heat. One of the squad saw that I was struggling and encouraged me to keep on - giving me the gift of caring words. And for the past few weeks I've been able to run four days a week and clock nearly 50k each week. All of these things I count as my fortune.

Yes, I know I've been a little extravagant the last couple of days with my purple pretties but I don't need them to be happy or content. All I need is the road in front of me, my ever-improving health and all the wonderful people in my life.

For those of you who came to read something light and possibly sarcastic I apologise. But I do have a little anecdote that might satisfy you until my sarcasm is fully restored.

It was my anniversary on Friday. Well, our anniversary really - I say 'my' because weddings are really only about the bride aren't they? The groom's just there as necessary window dressing.

Yes, twenty seven years ago I promised to "have and to hold from this day forward, for better for worse, for richer for poorer, in sickness and in health, to love and to cherish, till death us do part". And I've done my best to keep those vows.

I may have forgotten to cherish him at times. I may not have held him when he was sick (ughh, germs!) and thought uncharitable thoughts about his forgetfulness and his ability to wake the dead with his snoring. I may have even devised ways for the 'death do us part' to come earlier but my love was shown in the fact that I've never actually followed through with any of my fool-proof homicidal plans.

I didn't get to see him before he left for work but the first thing I said to him on his arrival home was "Happy Anniversary."

I have never seen such a look of disbelief, horror and confusion as what his face contorted into.

"But it's not the 26th!!" he exclaimed. And then there was the moment of realisation "Oh, that's Australia Day" and then a very abashed "Happy Anniversary."

It's just as well that I actually don't expect him to make a big fuss or I may have had to use one of those plans after all.
Posted by Char at 12:57 PM