I've been able to increase my kilometres in the last two weeks. I'm back up to running four times a week and I'm trying to stretch one run out a bit longer. But with the added kilometres comes a few little niggly aches and pains and the tendency to walk like an eighty year old for the first couple of minutes out of bed.(I may be exaggerating here. I know some very sprightly eighty year olds who probably spring out of bed much better than me.)

I have a problem hip. It's a little like a problem child - it whines and complains about doing anything it doesn't want to, it refuses to make his bed and put away his washing but if anyone mentions ice cream he's the first to put his hand up. Oh sorry. I got a little distracted by the problem child thing. But my hip DOES whine and complain if I don't treat it nicely. And by treating it nicely I mean stretching it DILIGENTLY after every run (and maybe even later during the day), doing a little yoga and torturing it with my roller and a tennis ball. Yes, my hip is into S and M.

Last week I was not a very judicious stretcher or roller. And my hip has decided to misbehave. My hip flexor has been super-tight and my sacro iliac joint has been complaining. The bottom half of me was a bit sick and twisted so I decided that action had to be taken. It was time to book in for a massage.

One of my sisters did a massage course last year and has been giving me 'mates rates' on massages. She was free this morning so I went around for my hour and a bit of torture and hip-taming. It's all fun and games until she actually starts touching me and then the groaning and wailing start.

My hip was so tight today that she couldn't tell what was muscle and what was bone. So she dug her elbow in. I need to mention at this point that Julie is a very strong woman. She's a rower who still competes at age 51. And she has really, really sharp, pointy elbows.

I tried to talk through the pain but sometimes my chat was interrupted by a guttural sound or a little cursing. A couple of times I had to go into a safe place in my head where no pain could touch me. And it was those times that I wondered what I'd done to make her want to hurt me so bad. We always got on pretty well even as kids.

And then it occurred to me that it was possibly pay-back for the time when we hung her first bra in a very public place when we knew that visitors were expected. Back then it was called a training bra - not sure why because breasts are a little immune to training. No amount of directing them to sit up and stay seems to work. I've even tried to bribe them with M&Ms. Don't judge - it works with Toby.

Julie had only had hers for a week or so and it was a source of fascination and amusement for her younger sisters. The Youth Group from church was coming over. We were young. We were immature. And it seemed really funny at the time. 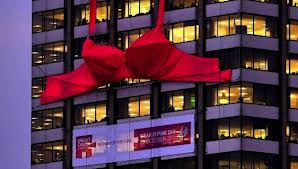 I can't quite remember the end of the story but I'm sure there was some embarrassment involved. But did that embarrassment cause lasting and painful memories? Enough to warrant pay-back??

When she finished I realised that, as usual, she had only my best interests at heart. My hip had stopped hurting. I could move much more freely than before. My sister still loves me.

Thanks Julie. And sorry about the bra thing. I won't ever do anything like that again.

My fashion faus pax clothing have undergone a little renovations so I can now run comfortably and without fiddling with my outfit for the entire run. (I will never again buy shorts that say 'cheeky' on the tag) I've sewn down the split in the shorts and hopefully it'll still allow me to run uphill. But despite this little hiccup I'd like to say that I'm very impressed with this range of clothing. It's called One Active and it's marketed through Big W. It has all the features that the big names have and that I'm looking for without the hefty price tag - $25 for a pair of shorts compared with the $65 pair that I tried on in Lorna Jane. And that means that I can buy more without guilt.

Heaven knows I don't need any more guilt than I've been living with for the last few days. Some of it is bad guilt. Like sneakily throwing away a shirt that I'd been soaking to get a stain out of only to realise a few hours later that I'd been a little heavy-handed with the bleach. I HAD managed to get out all those nasty sweat stains from under the arms but it's no longer the 70's and the tie-dyed look isn't so acceptable in the business place.

Some of my guilt has come in the form of guilty pleasures. Like taking one or two of Iven's Christmas chocolate and sneak-eating them. He has offered them to me because they're the ones with the nuts but they honestly taste better when I sneak them. And then there's the toilet paper that Josh brought home from his night away. Stolen hotel paper is softer and more absorbent. I can't tell you how much I've enjoyed going to the loo in the last couple of days.

Now I'm going to head off and have a guilty little nap in front of the tennis. I love holidays.