Do Something Each Day that Scares You - Does Walking Two Dogs Together Count?

Let's start by announcing the winner to my dodgy, home-made give-away prize. (I like to really talk things up) And the winner is (cue drum roll)... Ali Mac. Ali if you can contact me with a few details we can discuss what and where. 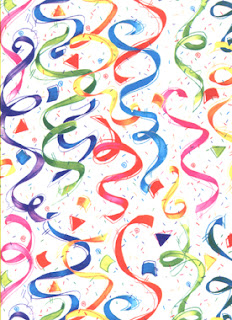 Okay, housekeeping done - time to talk about other fun stuff namely me!

I did something unusual, possibly foolhardy and definitely brave this morning. I took both dogs for a walk AT THE SAME TIME.

I've been walking Toby regularly for ages now but really didn't include Bubbles in our expeditions. My reasoning was that I had to concentrate on getting Toby  to be good on the lead with as few distractions as possible. Toby is blonde and can be a little ditzy at times especially when there's strange and interesting dogs around, birds to chase (yes, with me attached by the lead) and strange noises to frighten us.

Every time I'd pull on my walking shoes (which are really my old running shoes in disguise) Bubbles would get a little excited and whine frantically until I told her that she couldn't come and then she'd jump on the couch and look sad. 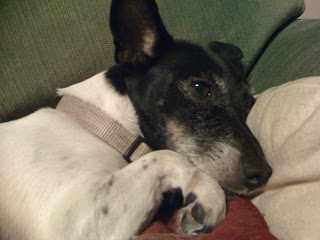 Nobody loves me, everybody hates me, think I'll go eat worms.

I know it doesn't seem fair but Bubbles is over 10, weighs about 4 kilos and probably gets enough exercise running around the back yard chasing turkeys, fighting with Toby and jumping on and off couches and beds. Toby needed the exercise way more and I simply didn't have the energy to do two walks in a day on top of running.

But Toby is a lot better on the lead now so for the last couple of walks I've put on my big girl pants and pulled out both of their leads. As you can imagine, this creates pandemonium. A walk, to a dog gives the same excitement level as telling an eight year old that you're taking them out of school for the day to go to Dreamworld or Disneyland (unless that eight year old is scared of rides and in that case the announcement might be greeted with projectile vomiting). 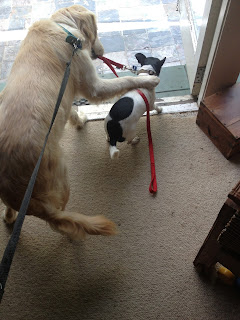 No need for you to come, Mum. I know the way I can take her.

There is jumping, barking and lots of pulling which make getting down the stairs in one piece a feat in itself. Just as well I've got these massive guns (thanks to my illicit performance-enhancing drug use). 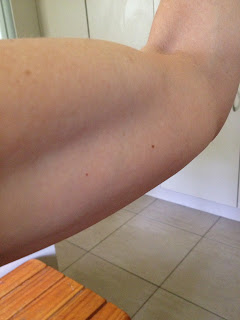 Once we've safely negotiated the stairs the fun really starts. Stop, start, stop, sniff. It wouldn't be so bad if they managed to synchronise their stops but the smell that stimulates one dog's olfactory organ doesn't titillate the nostrils of the other. They meander across the path, not at the same time mind you. The leads go over, under and through until we're just a tangle of flesh and fur held together by black and red nylon. 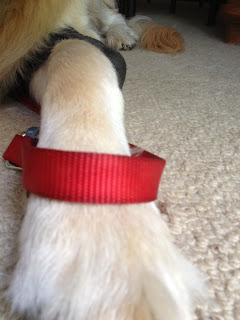 The walk was punctuated by detangling stops, poo pick-ups (yes, I'm a responsible dog owner) and foliage watering. But the best moment came when Bubbles decided to check out exactly what Toby was doing when he squatted. That's a mistake I doubt she'll make again - she really doesn't like having to have baths.

This was supposed to be my rest day after two solid days' training. Not so sure that it was restful. But at least I've got some very tired canines who aren't going to do any mattress or magazine tearing today.

I'd like to finish off with a little gratuitous bragging - again.

I finished an entire speed session yesterday!! That wouldn't have been worth bragging about a couple of years ago but since January last year it definitely gets the Gold Seal of Boastfulness. The session was to run continuous reps like a time trial at a pre-determined pace (approximate 10k pace). Luckily my last 10k was in July and was pretty slow so I put myself into the 5:30/k group. Even then I wasn't confident but I made all 8k under that pace (between 4:58 and 5:25). Obviously need to do a little work on getting my pacing more even.