The Power Of Purple

I felt sick Wednesday night. I couldn't quite work out why my stomach wanted to rid itself of its contents or why my intestines were making audible (and I'm talking loud enough to be heard over the tennis in another room) gurgles. I still felt a bit sick at 2:30am and that's when I made the decision to turn off my alarm and forget about running for the day.

The nausea and GI upset were still there when I woke up and it finally occurred to me that when the Gastroenterologist said to avoid cruciferous vegetables it meant coleslaw as well as just plain old cabbage. That mound that I'd laden onto my plate the night before had apparently been a bad decision. My bacterial flora had taken one whiff of the cabbage and decided to throw a drunken party complete with helium balloons and at one point they decided to pop all those balloons just for fun. Did I say helium? It may have been sulpher dioxide.

The party was all over by the middle of the afternoon. I think they'd all fallen into a drunken stupor and once again my stomach felt normal. And it was about this time that thoughts of my missed run started to tap at the front of my brain.

Actually, I lie just a little. The thoughts had been tapping all day and never so loud as when these showed up on my doorstep. 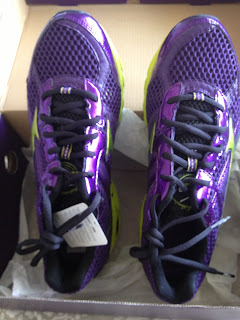 There is nothing more motivating to a runner than a new pair of shoes/running shorts/running top/socks or any piece of running technological wizardry. I knew as soon as they arrived that by day's end they would no longer have that new car, oops, shoe smell. And the bottoms would have some embedded gravel.

But there's a problem with running late at the moment. The temperature just doesn't drop until really late and sometimes doesn't drop at all. And then you have to factor in fuelling ie dinner. Should you have it before or after? And if it's after what can you prepare for the entire family that will still be edible when you get back. And will you need to make any unplanned toilet stops because your stomach isn't used to you running in the pm. Who would have thought that just pulling on a pair of shoes and going for a bit of a run would require so much planning and forethought?

The shoes felt so good after running in ones that were making my feet hurt. There's nothing like cushioning that hasn't been ground into oblivion by repeated bouts of pounding. I did feel a little clumsy in the dark shoes - they reminded me of wearing black leather shoes at school (which I only did for a very short while before finding out that it just wasn't cool and I could get away with runners) but I told myself that purple was the height of fashion.

By the fourth kilometre I'd hit the dirt track out at the university. And this was when I started to realise that my new purple shoes possibly had special powers.There was a man up ahead of me running and my shoes decided that we could catch and pass him. And that's what they did. Despite my brain yelling at my feet to slow down they continued relentlessly on their mission to prove superiority. At some point I thought about the Hans Christian Andersen fairytale where the little girl put on her red shoes and they made her dance until she had to have her feet amputated and after her feet were amputated they still continued to dance on in her beautiful red shoes. Luckily my purple shoes were happy just to burn past him (and I'd like to mention that he was a good fifteen years younger than me and pretty fit looking), leave him sucking in my dust (but no cabbage fumes thank goodness) but still allow me to stop for water at the bubbler.

I left the uni, headed back home and then had another demonstration of the awesome powers of purple once we hit Oakman Park. The path in the park is lined with lights. I managed to turn the first one off, the second one on, the third one off then the eighth and tenth ones off too just by running beneath them. And then when I got to the road I was blown a kiss by a passing weirdo. What incredible super powers my new shoes have! That certainly wouldn't have happened if I was wearing my old shoes and if it had been light enough for the driver to see what he was blowing a kiss at. 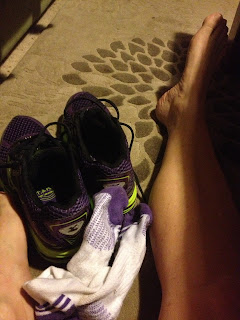 So do I like my new shoes? You betcha. I like them enough to go out and buy a matching bra today. Hey, if the purple did all that for my feet, I'm really excited to know what the bra's going to do. 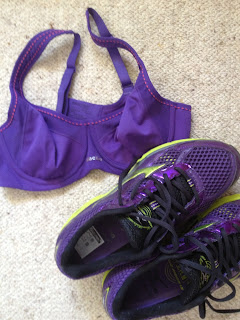 And even if it does nothing for up there, at least if I get hit by a bus I'll go out as a really coordinated corpse. I'm sure the staff at the mortuary will be impressed at my sense of style.

Some of you have noticed that there haven't been many pictures of cupcakes posted yet this year. (Yes, I mean you Jamoosh). That's probably because I actually hadn't made any yet. Gasp! My excuse is that I've been on holidays and it's just been way too hot to fire up the oven. But things came to a head the other day when there was actually not one brownie or cupcake left in the house and Luke and his girlfriend Becky felt obliged to make some.

So Wednesday I finally fired up the oven and made my first batch of cupcakes. And, being creatively inspired by finding some paper ice cream cups at the supermarket, I came up with a new way of presenting them which would be perfect for a kid's birthday party. 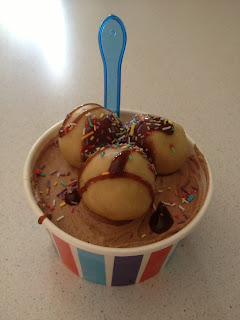 This is chocolate cupcake that I've baked in the cups, covered in chocolate buttercream and decorated with balls of cookie dough, chocolate sauce and sprinkles. It turned at just like I'd hoped. But that's a problem in itself - if I start off the year on a high, potentially the only way to go from there is down. Maybe I just will have to give up baking until 2014 rolls around.
Posted by Char at 6:50 PM