It was hard getting out of bed this morning.

The weather has finally turned and it's getting cooler. Cool weather means that my interest in snuggling under the bedclothes has increased (The testosterone treatment has also increased my interest in snuggling under the covers but that's totally different story which won't be told on my PG blog). Plus it's dark at 4:45am when my alarm goes off. Dark and cool just invites you to stay in bed doesn't it?

So I procrastinated for 12 minutes. Played it fast and loose by turning off my alarm clock and dozing for just a bit longer. Luckily my running-Nazi alter-ego was looking after me so I didn't fall back into a deep sleep so by 5:00am I was up eating a banana at the computer checking the results for the Paris Marathon.

Every single one of the Paris-ites finished. 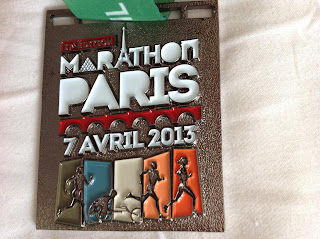 It's such a huge achievement particularly for the six first-timers and the ones that struggled with significant injuries. All the squad back here is so excited for them and proud of their achievements. And a little envious of their awesome medal and their adventure.

And those were the feelings that I took with me on this morning's run. It was, on my program, a 10k controlled run. But I've been a little relaxed with the program - if it says 10 and the route I want to run is 11 or 12 I don't stop once my watch beeps at 10k. And because I have entered a few races now (four as of this date) and I have no confidence in being able to sustain any pace, I've been trying to run a few of the kilometres a bit faster.

I'm counting the run as a confidence-builder leading up to the Mother's Day Classic (4.5k) in a month. It was also successful in another aspect. There was no frantic toilet-searching or bush-diving. My intestines decided to be kind to me for a change.

I got home with enough energy to take the dogs for a walk and on the walk ran into a niece who has just started a 6 week fitness challenge. We chatted while we walked (she'd finished her session) and she told me that she's going to run the 10k at the Gold Coast. I'm excited for her and secretly thrilled that all the brain-washing and subliminal messages that I've been sending are finally bearing fruit. Son #3, Luke and his girlfriend Becky have been running with a group every week and are thinking of doing the Mother's Day Classic. Son #1, Sam, has been doing some runs on top of training for soccer a couple of times a week. And son #2, Josh has just bought a road bike so I don't think that he'll be running for a while - not until the novelty of the new bike has worn off, at least.

I couldn't have asked for a better start to the week. Roll on Tuesday.
Posted by Char at 5:45 PM