Oops I Did It Again

Last week I had a couple of wins. Not of the monetary kind or the prize kind either. My wins came in the form of perfectly positioned toilets while I was out running.

Well my luck ran out on Monday. And that is why I will never gamble. A winning streak is always bound to end eventually and often it ends in a big way.

Last year I went to see a gastro-enterologist because I was having some disturbing, uncomfortable and room-clearing symptoms. He decided that I was suffering from IBS. And he decided that a few dietary changes were in order. Mostly I stick to the changes and sometimes I eat on regardless of consequence.

Possibly the fact that it had been Easter and Easter has some food-based traditions played a part in my gastric downfall. But I'm loathe to blame copious amounts of chocolate and hot cross buns because I'd be forced to give them up. So in this case I might blame corned beef and Brussels sprouts (even though I didn't actually eat any).

I was running my usual 11k Monday loop and was about 5k into it when the first signs that all was not well hit. I knew where the toilets were and they weren't too close but I thought it would be fine. It was probably less than a kilometre away - not so far when you're running but it gets to a point where running is tantamount to lighting a short fuse on a stick of dynamite. A kilometre can feel like a marathon when there's cramping and sweating and clenching and hobbling involved.

There are plenty of bushes where I run and, being that it was early on Easter Monday, there weren't too many people around so I knew that there was a port if the storm came. The only problem was that this is where my squad does speed session and I didn't think I could bear the shame if we had to run reps past here the very next day. Even if nobody knew.

So I headed cross country to where I knew I could find what I so desperately needed. And I made it ... only to find that the doors to the loos (or more appropriately - the gateway to paradise) were firmly locked.  And the next toilets were another kilometre away.

The expression on my face could have been used in a picture dictionary as the description for desperation and disappointment. There was nothing for it but to find the most discreet bush around.

There was an extra bounce in my step once I started running again. It's amazing how much easier running feels when you're not doubled over with cramps. And there was incentive to put distance between me and my make-shift loo as quickly as possible. But what's a girl to do? If you've got to go, you've got to go.

When I win the lottery (the odds of which are incredibly remote seeing as I don't and won't gamble) I will hire a special chauffeur-driven port-a-loo to follow me on all my runs. 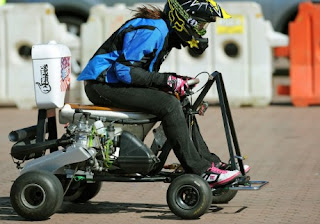 I wonder if these can go off-road too.
Posted by Char at 6:01 PM