I have to admit that my whole view of the world is tainted by being a runner.

Actually tainted is probably not the right word. It infers that it's been contaminated or poisoned in some way when it actually makes me see things through rose coloured glasses - or fogged-up glasses when the weather gets really humid.

What I'm actually trying to say is that I see the world in terms of running. For example if I see a road sign that says the exit is in 10k I immediately think - "I could do that in about 55 mins, maybe 50 if I was racing or being chased by a man wielding a machete"(because that sort of thing happens all the time when you're running down the highway in search of an exit).

When I'm driving routes that I run, I'll often tell my eye-rolling ('is she talking about running again?') passenger every minutiae of my last run on that route. Point out the hills (which strangely don't look at all hill-like when I'm driving). Show them bushes where I've had to make toilet stops (they're always so proud of their mother when I tell them stuff like that). And generally bore them to death with my one-tracked conversation.

On Saturday something happened which really showed just how obsessed with running I am. Iven and I were driving home from the markets and found ourselves behind a police station wagon. The back of the wagon was filled with lots of equipment and on top of the pile was a stack of witches cones. Instead of thinking "oh, he must be going out to set up an RBT (random breath test) somewhere" I thought "he must be going out to set up for a speed session".

There is absolutely no logic in that thought. Why would a uniformed policeman be driving somewhere in his police car to set up for a speed session? They wouldn't be but my brain associates cones with speed. 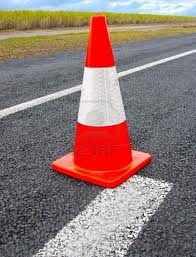 Or it could be that I'm just getting old and logic isn't part of my default thinking any more.

Does anyone else think like this?
Posted by Char at 3:12 PM