I've just worked out that I've been running on and off for 32 years. No, I didn't need a calculator to work that out. Or an abacus. I managed with just my fingers and toes and a few borrowed ones from my spouse.

You'd think after running all this time I'd know nearly everything to know about it. But it seems that I don't. Only just this last week I've learnt a couple of new things.

- If you can your morning's long run because you've spent most of the night tossing and turning then decide that you can make it up in the afternoon. Then if the weather is still pretty warm and humid and you run 19k and sweat like a pig. Then you get home and only drink a couple of glasses of water and don't pee before you go to bed you may wake up with your mouth feeling like the Sahara in the morning. You may also have a bit of a headache and feel like a wrung out dish rag.

Lesson learnt - dehydration is not fixed by going to bed and sleeping on it. And it definitely needs to be prioritised. The penalty I had to pay was missing my Monday run because I knew I was in need of another recovery day. But I substituted my favourite form of cross training and two dogs had 5k of happy sniffing.


- If you want to pick up your pace towards the end of a long run, accidentally run through the middle of a race.

Who does that? Well me, apparently. I had a 20k on the books for yesterday and there were only a couple of us going that far. We got to the turn around point together but somewhere on the way back I managed to lose them. This can happen if you're running at the front and don't realise that you've dropped them on the hills because you're in your happy place.

I waited for them at the bridge and while I was waiting a stampede of runners came past. It was the Southbank Park Run group and I decided that rather than run all the way back by myself I'd prefer to have company, so I joined in.

I can not run in a race (even if I'm not IN the race) without running a little bit faster. My stubborn pride makes me want to pass people who I decide I should be faster than. I wanted,with everything in my being, to be faster than the woman who was running with inappropriately short tights. (I love being old enough now to deem clothing as inappropriate.) There is no way that I want to be beaten by someone with a wedgie. And I didn't want to spend three kilometres watching her butt cheeks wobble.

My pace dropped from almost 6 min k's down to just over 5 min. I passed wedgie woman and a couple of youngish men. It does my heart good to still be able to 'chick' blokes at my age. And every time I do I wished I had the nerve to say 'you're being passed by a 50 year old'. Even better to do it when you've already run 15k.

I wished I'd been able to convince my fellow racers to continue on to my finish point instead of going back over the bridge to theirs. It would have made those last two kilometres go a little faster. But I was pretty satisfied to know that I can still pick up the pace even after running for an hour and a half.


It's Easter this weekend. So I spent the rest of the weekend getting busy with my piping bag. These will be coming with me to speed session on Tuesday. I'm not expecting to bring many home. 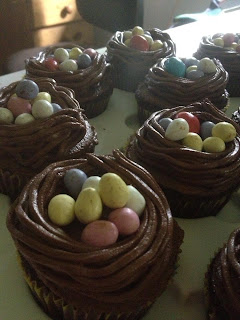 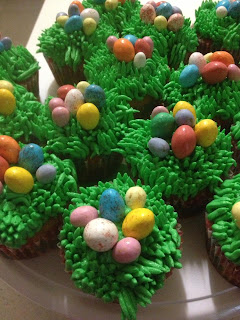