I haven't talked about my boys in a long time so I thought it was time to do a progeny- based post.

I have three sons, all of whom I'm pretty proud of. The woman that I met in the showers after speed session yesterday can attest to that. There's nothing like a bit of gratuitous boasting while you're naked for strangers to see you for who you really are - a slightly crazed woman who decided to keep humans instead of cats.

I've been banned from saying too much about them now that some of their friends read my blog (in the hope of getting some dirt on them, I suspect). So I've reserved my family stories to my husband (who's stuck with me for life so I get to say what I like AND he generally doesn't read my blog) and my four-legged son who will love me no matter what I write (AND he can't read my blog because he still hasn't worked out how to use the mouse without a prehensile thumb).

One of my sons recently had to undergo a physical for his work. He wasn't too concerned about it EXCEPT that he was going to have to do a urine test. He'd heard from his mates that he may have to do the test with someone watching and was worried that this might cause performance anxiety.

So to overcome any possible issues he decided to make sure he was really well hydrated before he went. I thought this was a really good idea until I remembered when I'd had to have an ultrasound during my first pregnancy.

I'd been told to drink two liters in the three hours before my appointment. And I'd dutifully done that only to arrive at the clinic almost sweating with the strain of my distended bladder. This had happened to my sister as well and she'd gotten to the point where there was just no holding it in so she'd asked to use the toilet. The ultrasound technician had said that yes, she could go but to only let out a little bit. Seriously, once you've reached that point of no return there is absolutely no way that you're going to be able to hold back the tide. And the fun wasn't over once they'd finished the ultrasound. All that water caused a water diuresis which meant that the rest of the day was spent rushing to the toilet.


I didn't want to worry him even more so I didn't share those stories with him (kind, aren't I?) and he went off to his appointment oblivious but fairly confident that he'd be able to perform when the time came. He definitely needed to go once they handed him the little sample pot. Then he was given his instructions. He wasn't to over-fill the pot. He wasn't to use the toilet afterwards. And the cubicle door had to stay open. So effectively he had to stem the tide while being watched. And the tide was high. 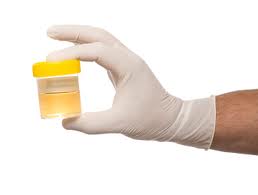 I'm happy to say that my son did exactly what he was asked. He showed control and restraint. More restraint and control than I'd be able to show. And that's why I'm proudly boasting about my boy for all the world to read. (And also why I was banned from mentioning his name).


***
Back to my wardrobe issue of the other day. I dealt with the built-ins just as I'd promised. A pair of scissors and some careful snipping and I'll never have to endure that pain again. And when I'd removed them I compared them to a pair of normal size 10 undies. 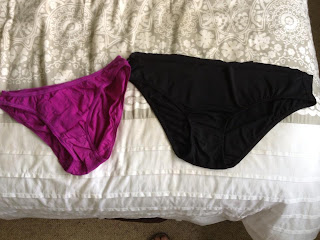 I have no idea what the manufacturer was thinking. They are more than two inches wider than a regular pair. No wonder I has having problems. No wonder they felt like they were bloomers. Did they put the siz 18 undies in the size 10 shorts?  Makes no sense to me.
Posted by Char at 5:28 PM