The rot has started to set in.

That's brain rot I'm talking about. I was warned that strange things start to happen to your body after you turn fifty but I didn't think it would happen quite so instantaneously. 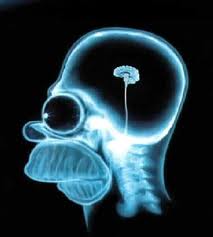 I went shopping last week. Nothing out of the ordinary there. I go to the shops almost every day. Mostly to just get out of the house and have a coffee. And to pick up the things that we've run out of because, with four males and a couple of girlfriends that are in and out, we run out of stuff fairly regularly.

But last week I wasn't allowed to park in my usual area. The centre is undergoing MAJOR renovations and it's incredibly annoying for the patrons. When I got out of the car I told myself in very stern words that I would have to remember that I'd parked in a different spot. So of course, when I came to leave I went down to my old area. I suppose it's not all bad - I got at least another 500m of incidental exercise because I'm forgetful. Score - Dementia 1: Me 0

On Sunday I had to meet a friend at a shopping centre over the other side of town. It was a birthday event - breakfast and the movies and lots of catching up. But at the end of the morning I remembered that I'd forgotten to get my Mum a birthday card and, seeing as it was her birthday that day, I couldn't really put it off any longer. But this was not my usual shopping centre and I had no idea where a newsagent was. And it's a big centre with a huge potential to get lost. So I decided that I would only head in a straight line and if there was no newsagent then I'd just have to make a card. Luckily there was a department store that sold cards (and, coincidentally, running ringlets and, even more coincidentally, there was an amazing red one in my size - score!). But by the time I'd chosen a card I'd forgotten exactly which direction I'd come in. Another extra 500m of incidental exercise that day but I DID make it to the car eventually. Dementia 2 : Me (still) 0

Monday I didn't run because it's my cut-back week so about 6:30am I staggered out of bed in that still somnolent state and started to get my breakfast. I pulled out a bowl and went to get my cereal but I couldn't see it. I moved all the boxes around but it definitely wasn't there. So I checked in the fridge to see if I'd inadvertently put it there. Nope! What the?!! It had been there yesterday.

My frustration and confusion was growing and I'd almost reached the point of total exasperation when I spied the container. On the bench. I must have pulled it out before I'd gotten my bowl but done it without thinking. Dementia 3: Me (embarrassingly, still) 0.

And finally, yesterday I got a win. Tuesdays I shower at the track which means that Monday I pack my bag with all the stuff I need - clothes (and yes, I've forgotten underwear once or twice), footwear, toiletries and my hair dryer. I put my hair dryer straight in the bag after I'd finished my hair on Monday morning. Or so I thought ... because when I went to pull it out on Tuesday, it wasn't anywhere to be seen. My brush was there but a brush is useless without the dryer. I pulled everything out of the bag and sure enough, there was NO dryer. I was positive that I'd put it in but I had a sinking feeling that I'd fully intended to put it in but hadn't followed the intention with an action.

Four incidents of brain rot in one week had to be a record. Not a good record and a sign of things to come - like days filled on eternal treasure hunts looking for items put down in the wrong spot, upsetting the boys by calling them the wrong names (oh yeah, I already do that one), confusing sugar with salt in my cupcakes, forgetting how to dress myself, drooling and having to wear a bib.

But then I remembered something (one point for me). Becky had been over on Monday and there was a chance that she'd used my dryer after she'd showered. And she just might have put the dryer back in it's usual spot. One text confirmed my suspicion. Yay! I wasn't totally losing it!! And that had to be worth at least five points to me. (It's my game so I get to work out the point-scoring system) 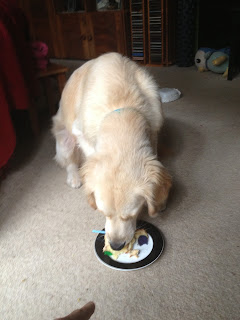 Just a post-script about Toby's birthday. If you look carefully at the picture, you might see that there's a candle in the cake. Two seconds after I took that photo there was a candle in Toby. Oops - not my best and proudest veterinary moment but I wasn't too worried. I was pretty sure it would pass.

So for the past few days I've been shadowing Toby pretty closely to make sure that if someone was to x-ray him they wouldn't feel the urge to sing Happy Birthday.

I took him on a walk on Monday but let's just say that walk was non-productive. So I left instructions for Iven to watch him on Tuesday  morning while I was out running and mark on a map if he did the 'squat and drop'. I got home after speed to find no map (proving that I love Toby more than he does) so I decided to see if I could find his freshest offering. Surprisingly, the pile with all the flies around it wasn't the freshest. There were two other piles that had a moistness factor that only the very recent can lay claim to. But despite close examination with a stick, I found no trace of the pretty blue candle.

Last night Iven took Toby for his walk and voila, out it popped to the amazement of all the passing dogs and owners (although I'm sure they would have been even more amazed had it emerged lit).

I'm currently trying to think of a feasible story to explain to the neighbours why I was trawling our garden and skewering dog poo. Any suggestions will be gratefully received.
Posted by Char at 6:03 PM