Wardrobe Malfunction Number 2 (Or The Perils of Built-in Undies)

My last post was about weird injuries that have happened to me in the commission of my work in a very sedentary job.

I don't believe there is anything wrong with crying like a girl most of the time. I'm a girl and sometimes we cry. A lot of the time we have reason to cry - like when we read read cute, touching stories about dogs, watch Hallmark card ads and see the emotion of an athlete on the dais receiving their medal and listening to their national anthem. But sometimes there's no reason. And that's what crying like a girl is all about.

Yesterday I did my long run. I was a bit nervous about this run. I get nervous about a lot of runs since I've been sick. I still don't totally trust my body and I just don't know how far I can push without breaking it. I like to pretend that I still believe that I'm unbreakable but in the wee small hours of the night when all I have to keep me company are my thoughts, little trickles of doubt flood in. My program had me down for a 20k run but I'd had a gruelling 20k two weeks before and missed the one last week so I was feeling particularly doubtful about my abilities.

I turned up at the run knowing that I could manage 12k and hoping that I could do 16k but also knowing that I had to keep the pace really moderate (aka slow) to give myself a chance to finish it with grace and dignity. It's been raining for most of the week and the forecast was saying that it would rain again so it was no surprise that it started to bucket down on us not long after we started. No worries, at least it was cool.

It was at about the 5k mark that I noticed something unpleasant and painful was happening in my undercarriage.

I've posted about my fear of wardrobe malfunction while wearing shorts with the built-in undies and I was wearing just such a pair of shorts yesterday. The undies that are provided don't exactly fit the way my regular, every-day undies fit. They're a little more like old-fashioned bloomers that only seem to touch you on your waist and around the tops of your legs. The rest of them are generously proportioned unlike my undies which lovingly caress and cling and kinda hold you in. But tip a bucket of water or two on the built-in undies and they will start to caress and cling too and unfortunately some of that clinging involved a vice-like grip on my short and curlies.

I tried to subtly disengage the death grip whilst still maintaining rhythm and conversation. The elastic pick manoeuvre had little effect. So I left it another kilometre before trying the pick, pull and wriggle technique. When I released said elastic I realised that the tugging, if anything had become worse. It felt a little like I was giving myself a Brazilian, one clump of hair at a time. I was just glad I was running in rain so if a tear of pain just happened to trickle down my face, no one would notice. 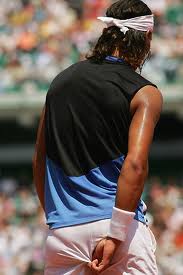 Nice to know that this type of wardrobe malfunction happens even to the greats of sport.


Over and over I tried to free myself from this painful entanglement and over and over I failed until eventually I gave up and accepted that the rest of the run would be uncomfortable. But I must say that this minor catastrophe had provided a good distraction from the actual running pain and the run that was originally going to be 12k had stretched past 16 to 18k. One triumph at least.

It was with joyful anticipation that I finally stripped off to have my shower. Finally, the pain was gone. Or at least it was until I actually got under the warm stream. The pain I'd felt before was nothing like that caused by a little soap and water. I spent the rest of the day walking around like I'd been droving sheep on a bony Brumby without a saddle for a week.

Yes, some of you will think I had every reason to cry therefore it would not be crying like a girl. But the very nature of running involves pain or at least discomfort. We runners must have a masochistic streak because we push ourselves to the point of pain regularly and come back eagerly for more. It's something we do because we like it so it shouldn't be the source of tears.

I've come up with a way to never have this happen again. 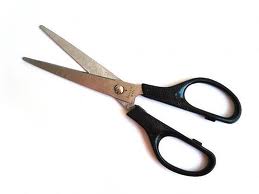 These are to cut the liners out of the shorts - nothing more.

No longer will I be dictated to by the whimsy of sportswear manufacturers. This girl will be choosing her own running undergarments from now on.
Posted by Char at 1:29 PM