I was so naive going into my fiftieth birthday. I figured that I'd have a week long festival of celebrations (which I did), have to shrug off some good natured banter about the onset of a host of age-related maladies (which I did) and then be able to forget that it ever happened.

But I was wrong.

Yesterday, in the mail, I received the first of who-knows-how-many gifts from the government which I'm sure is their kind way of letting me know that I'm on a slippery slope downhill to a pine box. Happy Birthday to me!

That pretty pink envelope had a nice invitation to go get a free mammogram because I'm in the right age bracket now to be needing such things. That actually didn't worry me too much. I've had mammograms before courtesy of having lumpy breasts and they're no big deal. Plus I'm all for preventative screening. But when I posted about this on Facebook I got a couple of responses that got me thinking. 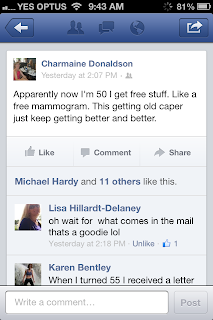 Lisa's response was a little cryptic until I remembered that when Iven turned fifty he got a lumpy tan envelope in the mail. The lump in it was a small pathology collection bottle in which the patient/client is supposed to put a small amount of ... how do I put this nicely?... poo. It's to be tested for occult blood - blood that's there but can't be seen and which may be the indicator of something sinister.

Again, I'm all for preventative medicine and being pro-active with your health but sometimes I like to use the princess/squeamish girly card and collecting my own poo to send off for someone to dabble around in is one of those times.

Funnily enough I don't use that princess/squeamish girly card when I'm poking around in my dog's poo looking for candles. And I never used it when I was a vet student with my arm plunged up to the shoulder in a cow's rectum. But as a woman I reserve the right to be fickle. That makes me so much more fun and spontaneous - or, as my family will testify, erratic. Too bad boys - the upside of living with me is all those yummy cupcakes.

But now I've begun dreading getting that tan envelope. I'm pretty sure I'll have performance anxiety which might cause a catastrophic bowel shut down. And because I've had to modify my eating habits since developing a few food intolerances, I can be erratic at the best of times. (TMI?)

At least I have a sure-fire way to get things moving. I know I bang on about running being a cure for all that ails you (except over training syndrome and running-related injuries), but in this case it's most definitely true. Running can make you need to go and need to go in a hurry! That's probably the only reason why I know where every public toilet is within a ten kilometre radius. I also know where all the best branching, discreet trees are too. And it's why I prefer to run in the dark of morning rather than bright sunlight.

Only just last week I got caught a little short (like over 2k) and had to do a bit of bush bashing. The bush bashing part isn't too bad apart from all the spiders webs (and they're kind of reassuring that you're in a spot that is seldom used). It's the emerging from the bushes that's the scary bit - it's a little disconcerting when you almost bump into someone on your way out.

But I checked before I went in and I'm sure I didn't see anyone.

Emerging from the bushes with that little bottle in hand would be a hard one to explain away.

And the performance anxiety isn't just over the production. I'm also worried about the quality. The consistency, the colour and the content. Would it ring alarm bells if they found glitter and parts of sequins? Hey, I work with fancy fabrics and those sequins end up in the most extraordinary places.

But back to Facebook and Karen's comment. When she turned 55 she was offered discounts on a range of mobility aids and incontinence products. (This offer was incredibly ludicrous considering that Karen regularly performs feats of endurance that would be daunting to someone half her age. She ran the 6 Foot Track only a couple of weeks ago)

Oh great! I have only five more years until I'm not supposed to be able to get around under my own steam. Seriously??? Those wheelie-walkers would cause a bit of havoc when I'm lining up in a race. But I'm sure a self-adhesive incontinence pad could have other uses. Like as a heavy duty bandaid for when I fall during a trail race. And some of those super-soaker incontinence pads could be used to dry up those pesky creek crossings so I can keep my shoes dry. 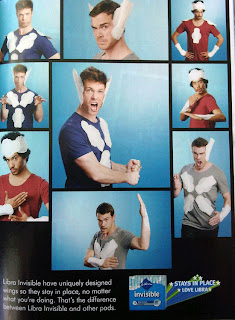 So after a lot of careful consideration, I think that Queensland health need a new logo for all their "Over 50" initiatives. 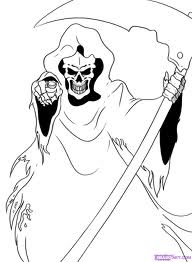 Yep, turning fifty has had a charm all of its own.