Running In The Spirit Of The Anzacs

I finally did it!

No, I haven't committed any mortal sin that would land me in jail and leave my children fatherless. Since my last post Iven has been behaving himself. Kind of. He's still not following his post-op instructions to the letter but he has stopped using tools, power or otherwise. I'd like to say it was because I was smart enough to hide the key to his tool room. But alas I am not. Well, I'm smart enough to think about doing it but I'm also smart enough to realise that I may forget where I've hidden the key.

What I actually did was go to my first hill session in, let me just count, at least 10 months. Actually it's longer than that but I only have just so many fingers and my shoes are still on.

It's Anzac Day today and in honour of the Anzac spirit one of our runners, Rob. organised a special trail run to remind us about enduring hardships and supporting each other to achieve our goal.

Twenty four intrepid runners turned up at our meeting place before dawn, a little wary of what lay ahead but determined to complete the task at hand. Well I was anyway. When you haven't run any hills for twenty months (Iven lent me his toes so I could finish counting - he couldn't lend his fingers for obvious reasons) you know that there's a world of pain waiting for you in them thar hills. 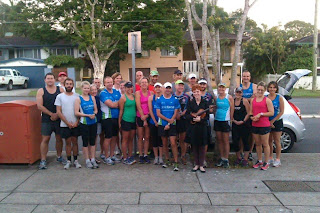 We stood around chatting for a while as the day dawned. I managed to end up under a tree that was home to a bird with a nervous stomach. I'm guessing, from the size of the poop on my shoulder that it was probably an albatross which is strange and quite rare for an inland city. But I took the bird's blessing as a good sign that my feet would have wings.

Turns out that I might have read a bit much into it and sometimes bird poop on your shoulder is nothing more than a mess to clean up.

Rob had organised a special treat because of the special occasion - a violinist to play us The Last Post before we headed out. And with those haunting strains still resonating in our brains we started.

There was a lot of uphill in the first kilometre. There was going to be no easing ourselves into this run. Soon enough though my muscles started to remember that somewhere in the distant past I had been able to do this and it started to feel a bit easier. We spread out over the trails, regrouping every so often and then pushing onwards.

The first five kilometres were actually quite pleasant. We were in the bush, surrounded by trees and birds on undulating paths chatting and enjoying nature. But then came the last push up to a lookout and that's when I knew that not running hills for twenty months makes running hills a little more challenging.

But I made it! And I didn't stop (except when the whole group stopped to reassemble). And I wasn't the last one up - close to the last but I'm okay with that.

It was a magnificent view from the lookout. We hung around and snacked on lollies for a while and then started back down again. And my legs weren't feeling their normal self. The effort of getting to the summit had made them somewhat jelly-like. Running downhill on jelly legs is a scary proposition.

So to distract myself I tried to think of other things. Like the trees. And the birds. And just how many people used the same trail to walk their dog. And boy, my butt and legs feel shaky (yeah, I'm not very good at distracting myself). I wonder if the people behind me can see the extra wobble. No, wiggle sounds much better than wobble. Wobble sounds like I have a huge, lardacious posterior. Wiggle sounds like I have at least some control over whatever wobbling is happening. Like twerking. (How cool am I to know what twerking is??) Hmmm, I wonder if I keep running up hills will I develop enough of a derrière to twerk?

And that's about when the run stopped. Not with me contemplating the sacrifices that the Anzacs made to keep our nation safe so we can enjoy a wonderful lifestyle. But with me pondering my next challenge. I think, compared to this, that marathon training will be a walk in the park. But I'm determined. One day I will be doing this at one of my son's wedding.