Toby has a little problem.

It's a pretty common problem for dogs of his breed and similar breeds. But it's a problem that needs to be addressed for him to live a long and healthy life.

Toby loves food! He's an unashamed binger and will eat almost anything. Broccoli, beans, mouldy bread - if he can find it he will eat it.

And it's starting to show. I've noticed a definite wiggle in his walk lately. Actually it's more like a waddle where his belly is swaying from side to side as he makes his way from couch to food bowl and back again. Oh, yes - he's a couch potato that has a nice turn of speed when he hears someone rummaging in the pantry. And he's my constant companion once I put my baking apron on.

I tried to convince myself that it was just his winter coat but not even I can ignore that waddle. So I'm going to have to harden up and start to ignore those pleading eyes. 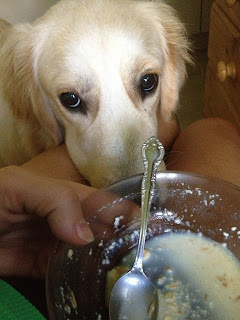 We decided as a family that we were going to reduce his dog food and the number of leftovers that he's offered. And this has resulted in more leftovers going into the compost which in turn goes into the hen. I can live with a fat hen but not a fat dog.

But this has not gone unnoticed by our astute and cunning canine. Unbeknownst to me, he's been making forays into the chook run to help himself to what he thinks is rightfully his. And here I was thinking that his new diet wasn't working.

The other day I went outside to see why our hen was a little upset and there was Toby. He wasn't interested in her - only her food - and she was indignant that she had to share all those luscious morsels of dinners past. 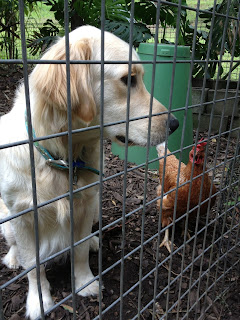 So Iven has had to do a little work on the fence. This is the doggy version of a padlock on the fridge. 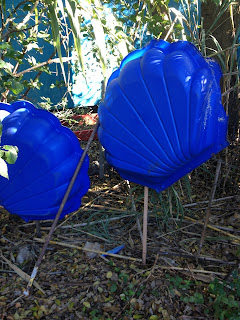 I'm pretty sure that his reduced food intake and his nightly walks will have him back to normal in no time.

And for those of you wondering why I don't just take him running with me (which was one of my plans when I bought him). He is just like his human brothers when they were younger. No amount of cajoling or bribery could get them to see running as a fun exercise. They'd come for a couple of times around cross-country and then they'd find some excuse why they couldn't. Toby likes the IDEA of a run but isn't in love with any distance over 500m. He slows down. He sits. He's even been known to lie down and refuse to move. It takes me back to having a two year old - without the full blown heel-stomping, red-faced tantrum.

Any ideas in how to make my boy into a lean, mean running machine?