Ughh! It's been a LONG week. I guess that's not surprising after having such a lovely weekend. All the usual everyday stuff seems so mundane and drab. What I should have done - other than come home and work, cook, clean etc. - is invite myself along on the honeymoon. I swear I wouldn't have made a nuisance of myself. They'd hardly notice that I was there and I could have come in handy taking pictures of the two of them together on their travels.

I've managed to get through the BORING days at work by going to a happy place in my head - that little romantic bubble that we were all cocooned in on the weekend. Luckily I haven't had too many clients come over because I could often be found sitting with a dopey grin and a glazed look in my eyes.

Luckily there have been a couple of distractions - a political coup by a certain K Rudd which means that I will probably be taken away for a brain scan if I'm taken to hospital with a head knock and someone asks me who our current Prime Minister is.

And there was also that important game of Rugby League on Wednesday night. I'm still waiting for Coach Chris to come over to eat humble pie - or in this case cupcake with a chocolate coated cockroach garnish. I guess he's had a busy week. 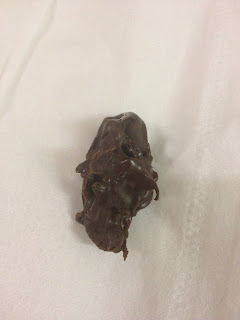 #3 son, Luke and girlfriend, Becky invited us over to watch the game with them at the house they've been looking after. I've heard that once a child leaves home that they can change but I wasn't quite expecting this - Luke in his penguin suit. I hadn't realised that the dress code for the evening was formal. I'd just worn jeans. 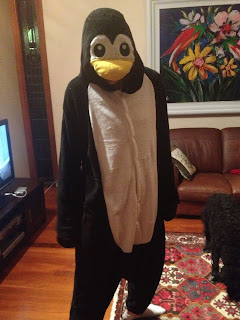 And of course there's been some running. In an amazing/unfortunate coincidence we ended up doing exactly the speed session that I'd been talking about just the day before with the bride and groom as we walked along the beach. We'd all agreed that the 3k, 2k, 1k session that we used to do was probably our least liked (okay, we may have said hated and despised but I don't want Coach Chris to get ideas and include it more regularly) and wasn't it nice that we didn't do it any more?? I could hardly believe my ears and my luck (?) when he announced what we were doing Tuesday morning. But Thursday morning's run into the Gardens and seeing the Storey Bridge glowing red after the big win the night before really made up for it. 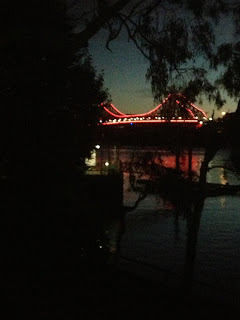 We got the go-ahead from the bride to put up wedding pics on Facebook last night. Awesome! I finally got to see how I looked. I was too cowardly to have a good look when I was getting ready because I knew if I didn't think I looked okay I would have been incredibly self-conscious in the photos. Ignorance can be bliss! I think part of me was a little scared that people would look at the photos and wonder why Bec had asked this lady who was old enough to be her Mum (but only just and only if I'd been sexually precocious which I wasn't) to be part of the wedding party. 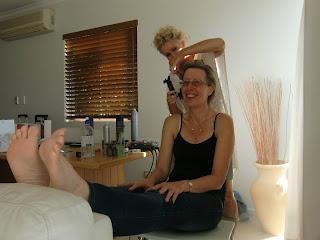 Channelling my inner girly girl. Hair. Make up. Nails. First time I've had this done in ... ever. Better late than never. 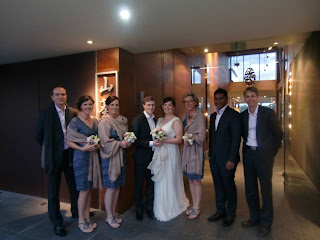 The whole group outside Wasabi Restaurant. 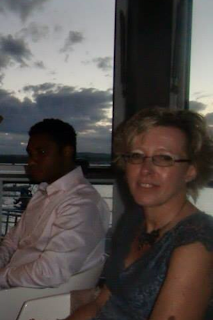 Daven and I. We were sitting just in front of a glass wall - amazing views of the water but no real sunset because of the clouds. 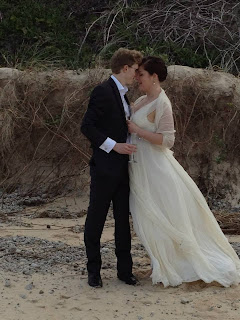 My favourite picture so far. I haven't seen any of the professional ones but this one just says everything.