Wedding Of The Year

All weddings by nature are a beautiful thing. After all, what's not beautiful about two souls finding each other and committing to care for each other for the rest of their lives?

Some weddings, however, are just that little bit more meaningful - more intimate, personal and touch you down deep enough to make you remember way back when. Bec and Tom's wedding was one of those.

I've been trying to compose a post that would give justice to how lovely last weekend was and have decided against a minute-by-minute account. I'd rather try and share the pictures and special moments that are going to be in my memory's highlight reel.

Firstly, though, I'll just give you a brief overview of the main characters of this love story. I've known Tom pretty much as long as I've been running with the squad but I knew him first as 'Tom-and-James'. He's a twin and I couldn't tell them apart for a LONG time. Bec was also in the squad and the first time I really talked to her was on a run and she confided in me that she was just starting to see Tom. Tom is mature beyond his years. Sensible. Caring. Hard working. Loyal. Devoted. Bec is warm and effervescent and glows with an inner and outer beauty. She hates being the centre of attention but her personality draws people in like moths to the flame. They decided to have a very small wedding - just themselves and six friends. And I was privileged enough to be one of them.

They booked two apartments for the eight of us up at the Sunshine Coast for the weekend and that's where we headed after our long run on Saturday.

That's the introduction done and now comes the highlights.

Magnificent weather. Amazing views from the apartments. And 57 steps to climb up and down every time we wanted to go anywhere. Forgetting to go to the loo once you'd got to the car meant an incidental hill session. Didn't mind so much on Sunday but on Saturday after 20k and a two hour drive without stretching ... let's just say I was feeling the burn. 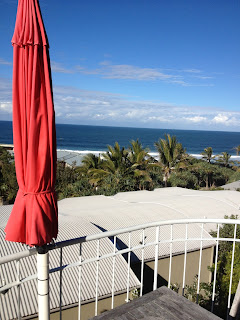 Bec, the bride, with Bek and Shelley, the bridesmaids. Definitely highlights! I had met Bek a couple of times before wedding planning had started but only met Shelley recently and I know why Bec loves them so much. Warm. Open. Funny. We talked and laughed so much that our cheeks ached and our stomach muscles hurt. 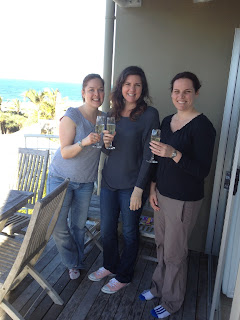 Saturday dinner of fish and chips washed down with champagne, sitting on the sand. The huge moon shimmering a silver path over the waves. Enjoying the company, the sounds of the waves and the sense of peace. 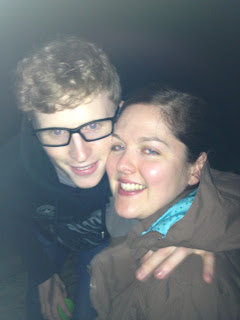 Waking up Sunday morning to the promise of a gorgeous day. A hug with the bride-to-be in the kitchen before the day really got started. She was excited and nervous. Glowing even before any make-up had been applied. 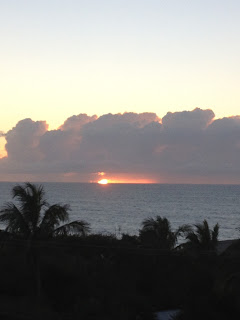 Ducking up the road to get a coffee. Ringing Youngie, the only one of the wedding party not yet there (apparently the Wallabies v Lions game was a big deal if you like Rugby) to make sure he HAD remembered THE dress. 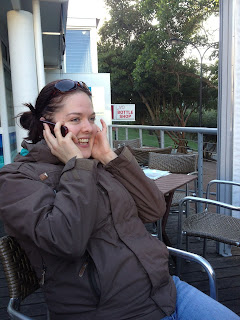 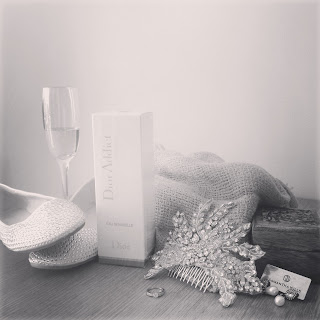 The bouquets were just whipped up by Bek, a graphic designer, who has an amazing eye for form and colour. She also took the most artistic photos at the reception and kindly let me use some of them. 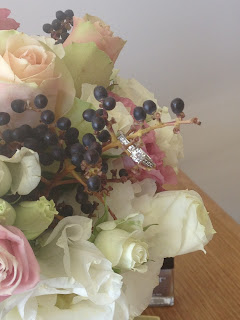 I wouldn't have believed that Bec could be any more glowing but she was. The dress was gorgeous and her hair made her look she'd time-travelled from the 1920s - classically beautiful. 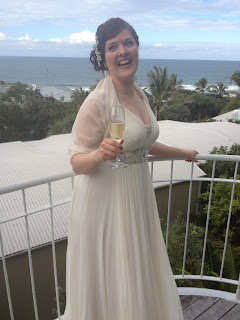 The look on Tom's face when she walked down the aisle made some of us well up a little. Unfortunately I have no pics from either the church or after taking photos on the beach. But I have some moments that will stay with me forever (or until dementia really kicks in). The little girl who was mesmerised by the princess walking towards her. The dachshund puppy who found it all too scary. The lifeguard who had no idea when he was putting on his uniform that morning that he'd end up in someone's wedding album. Watching Bek take off her sandals to stop them from getting wet only to have them nearly wash out to sea.

The reception at a two hatted Japanese restaurant, Wasabi, was so intimate. We had plate after plate of the most incredible-tasting food that was all explained to us in detail by our waiter. Seaweed that only grows in whirlpools in a particular location. Blue fin tuna that's collected straight from the boat up the road before the rest of the catch is shipped over to Japan, then man-handled by the chefs into their fish-smelling station wagon. Wagyu beef that has had classical music played to it and has been massaged daily by the virgin daughters of the last Tsar of Russia who escaped the Bolsheviks. Okay I might have made up the bit about the Russian virgin princesses . How much champagne did I have?? 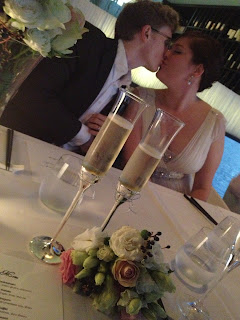 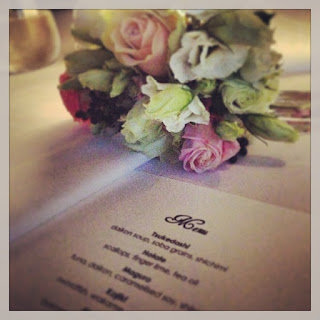 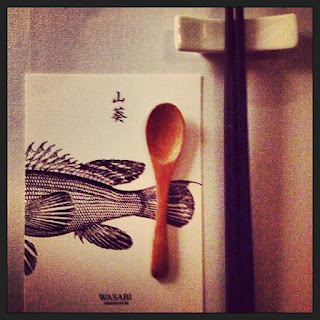 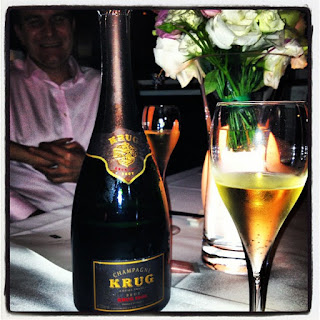 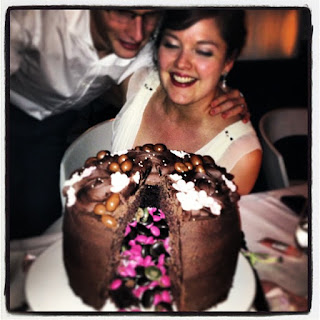 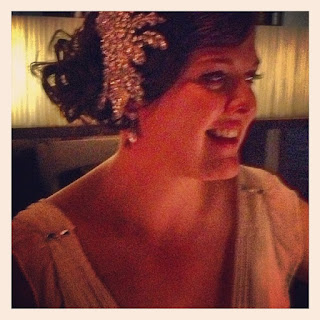 The one thing that stands out most from the reception would have to be the speeches. Goosebumps when Tom told us of the first time he noticed Bec who'd just finished a race and how he thought she was the most beautiful thing he'd ever seen. Damp eyes all round when Shelley talked about her relationship with Bec. Laughter when Bek told us about the time Bec overstayed her welcome. There was so much love at the table. 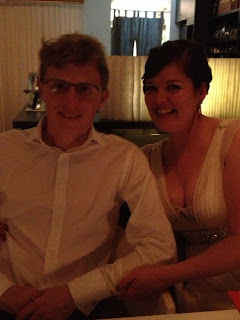 Then back at the apartment we all assembled in the lounge in our pyjamas and de-glammed, talked some more, laughed some more and listened to music. 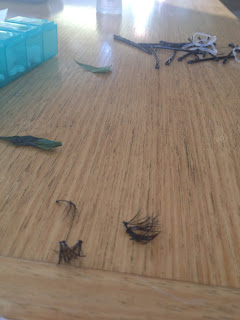 It's a bit scary how yesterday's beautiful eyelashes can look like spiders when you wake up the next day.

And for those who asked to see this particular bridesmaid - I'm betting you're regretting that right about now. This is a selfie taken the morning after the night before. Five hours of restless sleep always has me looking my best. Took me a good ten minutes to get my hair out of it's gravity-defying state so I could sneak out to an early coffee with the newly-weds. 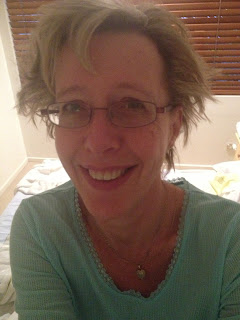 I really don't know if I can do the wedding justice - it's hard to convey exactly how special this wedding was to be part of. The whole weekend was such a high that it's going to be tough to settle back into real life.

Thanks again Tom and Bec for letting me share it with you. Have a wonderful honeymoon and I'll see you (and thousands of photos of your travels) in about a month.
Posted by Char at 7:26 PM