An Optimist At Heart

I realised yesterday that my optimism isn't limited just to running speed sessions. It pervades other areas of my life and I was a little bemused to realise it because I sometimes consider myself a pessimist. Like when my husband gets a sore back and I immediately jump to him being declared disabled, not being able to work any more, me having to work full time plus nurse him and having to give up running because I don't have the time or the energy to do it.

By the way, Iven's back is still slowly improving. But back to the story at hand.

There is a link between me being busting and being optimistic. The optimistic part was the moment I decided, after drinking most of my water bottle and a large coffee and sitting around chatting with my Mum for an hour or so, that the urge I felt on getting up wasn't that urgent and I could hold it till I got home. After all I only had to go to a couple of shops in search of a new handbag, get down to the car, go through parcel pick up and drive a couple of kilometres.

As any woman will tell you, shopping for a new handbag is a serious job. A handbag is not just a fashion accessory, it has to 'work' for the bag-holder. In my case it must be the right colour (black because my boots and sandals are black - and my boots and sandals are black because they had to match my handbag), have an external pocket big enough to put a water bottle in (because I'm a runner and carry water with me everywhere and carrying a water bottle that might leak just a little with your phone that doesn't like moisture isn't a good idea) AND have enough compartments to stick all my stuff (and believe me, I like to carry a lot of stuff). A decision on a new handbag can not be made too lightly or quickly.

I did try to speed the process a little by asking the shop assistant if she could point me to any bags that fit my exacting requirements.

That was a mistake.

She proceeded to show me every black bag in the shop and even some bags that weren't black. None were right and when I pointed that out (nicely - not in my 'hurry-the-hell-up-cause-I-need-the-loo tone) she suggested that I just buy the same one again.

Doh! Why hadn't I thought of that?

Of course I'd thought of that! I'd scoured the shop I'd bought it from (two years ago) and even looked on line. They had the same bag style but in orange.

I do not have orange shoes. So that patently wouldn't work.

I explained all this. She suggested I try the different colour. Great idea because orange goes with absolutely nothing in my wardrobe.

That was the point that I decided that handbag shopping could wait for another day.

Next stop - not the toilet, which would have been sensible - the car. My local shopping centre has been undergoing renovations and you never know exactly which escalators will be working. This meant that getting down to the car involved walking the length of the centre on two different levels trying to find a way down. (Probably should have taken the elevator but I thought I'd have to wait and, because I was semi-busting, I didn't want to wait).

Finally made it to my car and believe me I felt way more comfortable sitting than standing. Drove to the parcel pick-up area and was pleased to see that there was only two cars ahead of me. Luck was on my side - I wasn't going to have to wait long here. But I couldn't say the same when it came to actually leaving the car park. Those renovations mean that there are lollipop men controlling the flow of traffic and my lollipop man didn't understand that my squirming wasn't some uncoordinated car-dance to a boppy tune on the radio.

I was starting to sweat.

A few minutes (felt like ten but was probably only two or three) later I was on the road heading home. But there was one last obstacle to overcome - the dreaded roundabout! At that time of day you can sometimes be lucky and get no traffic. But Murphy's Law states that if you are busting to go to the toilet you will be forced to wait interminably at any potential traffic stop.

And so I waited. And squirmed some more. And turned up the air-conditioning to help with the cold sweat.

A little side-note for new readers. I have three children. My pelvic floor has been through the wars three times. And although I know that holding on is good muscle training, I don't usually test those muscles to quite that extent.

But this story has a happy ending. My optimism was not unfounded. I made it home and even managed to walk with some dignity into the house.

My toilet has never looked so good. (Partly because of my relief but also because it was cleaning day and the toilet had been scrubbed - thanks Evelyn). 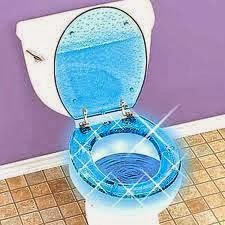 But next time I have that decision to make, I think I might choose the go-before-you-go option.