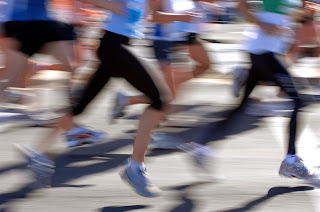 With one successful post-marathon run under my belt, I was quite looking forward to speed session this week.

I'd told myself and Coach Chris that I wasn't going to push myself too hard. If there's a time that you're allowed to slacken off a little it's in the couple of weeks after a marathon. My training buddy Elio reckons that there's a statute of limitations on using that as an excuse. So it's my mission to find out just how long that time frame is - how long can I push it until Coach Chris puts a bomb under me.

Even though I'd told myself that I was going to take it easy, it's not that simple to do. Somehow I get carried away with the adrenalin of the group and push a little harder than I intend.

Coach Chris said go and we all headed out. My legs were feeling pretty good so I just let myself be swept along. We reached the turn around and Barry (Chris's assistant coach) gave us an interim time - 2:14. Hmm, maybe a little fast but I was still feeling okay so I went with it. I stopped my watch at 4:28. My fastest 1k split all year. Yay!

The aim of speed session is yes, to run fast. But it's also to run at a pace that you can sustain for the entire session. Running your fastest 1k split of the year is a momentarily heady rush but it's also a dangerous thing. You tell yourself that you can do it. That it's just an issue of mind over matter. But unfortunately for me there's a disconnect between my mind's ability to dream big and the physical ability of my heart, lungs and muscles.

In short, the session that started out brilliantly quickly deteriorated. The first two 500m reps were fine. The next 1k rep was 12s slower than the first and had me contemplating faking an injury. On one of the subsequent 500m reps I was struggling to keep down my banana. The third 1k rep saw me losing all will to live but I still went on to finish that set. Then I pulled the plug.

Maybe I could have done another 1k rep. But it would have been ugly and probably pointless.

I learnt a couple of things from the session. Obviously two weeks isn't quite long enough for marathon recovery despite my legs feeling good. And pacing is absolutely fundamental if I'm going to have a successful speed session.

After seven years of doing these sessions you'd think I'd know better by now. But it just goes to show that I'm an optimist at heart.

And just a little post script - Iven's gone back to work today. Just for a half day but a half day's better than nothing. I can't tell you how my heart sang when I saw the empty couch this morning. How delicious the coffee was and how I enjoyed doing the crossword. Alone! It's just like my spirit's getting the long-overdue recharge that it needed to be a nicer, kinder and more civil human.

I'm keeping my fingers crossed that he survives his few hours of work without any repercussions so the process can be repeated tomorrow.