Tapering is supposed to be a time to recover. To give all that hard work that you've done over the months a chance to work. It's also the traditional time for runners to let out their inner crazy person to become a hypochondriac for a week or two and basically become impossible to live with.

I am currently tapering. But I'm trying to do it the non-traditional route. I'm trying to be calm, cool and collected. And I'm trying not to let my latent hypochondriac out to mess with my head. And so far I'm doing okay. That means there's something wrong with me, doesn't it?

And really I have every reason to be a little bit worried at the moment. I've had two runs this week and they've both been a little bit awful.

The first was Tuesday's speed session. The set was 4 blocks of 10 minute efforts with only a 1 minute recovery. After my second one I'd had it and sat out the third (or, more accurately, stood it out and chatted with Coach Chris) then I ran the last. It was incredibly humid and I don't think anyone finished at the same pace that they started on. I could have spent the rest of the day and, on past form, week mulling over my inability to perform and what it meant. But I chalked it up to the humidity and still being a bit tired from all those long run weekends. Sure I was hoping that an extra day rest on Sunday would have had me feeling fresh as a daisy but I wasn't so that was that.

Today's 12k run was also a little blah. Yes, blah is a word just ask Urban Dictionary. And you can use it to describe pretty much anything negative. In the case of today's run it meant that I stuffed up the timing with my watch, I wanted to stay in bed and keep dreaming because my dreams were strangely fascinating and involved monkeys that were trying to eat off my face (I wanted to see if they succeeded or if I escaped), there were hills and I hate hills and it felt hard (please refer to the aforementioned hills).

When I got home I looked at my watch's stats and what I saw didn't please me. My heart rate did seem a bit high and it wasn't that hot or humid this morning. A high heart rate has always been one of the first symptoms of over-training and I don't want to go back there. But then I remembered that part of me stuffing up the timing of the run was having to restart my Garmin after a kilometre so that meant my first and lowest heartrate kilometre wasn't counted in the data I was looking at. So I've disregarded all the negatives I had about the run. Sure it didn't reach my expectations but so what.

So the plan now is to try to keep this zenness (once again a real word - as long as Urban Dictionary is a real dictionary) for ten more days. And to run really easy for the last few runs - even the speed session (hear that Coach Chris? It's a mini-mutiny but only by one person and only for one session). I really don't know how well I'll go with my plans being that next week will be a perfect storm for me - tapering, PMS and pre-flight anxiety. Let's hope the Zen is more powerful than all those surging hormones. Otherwise it could get ugly.

So in the spirit of Zen I'm going to leave a happy photo of dogs and butterflies (actually it's just one dog and a moth. But a moth's like a butterfly isn't it?) 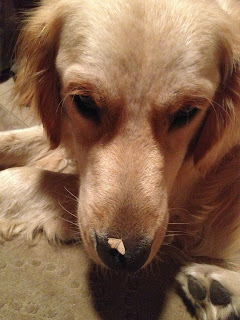