The Importance of Recovery and Cupcakes

Has it only been a week since I ran that marathon?

Seems like forever ago. And it seems like forever since I've run (Although I did sneak in a very little bit of running the other day when I was out with the dogs - but seeing as Bubbles has such short little legs and can't go very fast it hardly counts)

Apart from having the cold I've been feeling pretty normal. Yes, there was a day or so of muscle tightness after the race but since then my legs have felt incrementally stronger every day. I honestly feel normal.

But I know that this recovery time after a marathon is crucial for setting up the next training block so I'm trying to be patient and actually follow my program. I've read a lot of articles and I know that even though my legs might feel normal, there's been a bit of damage and time is needed for full repair to occur.

This week's program has just a couple of 20 minute walks on it and my first proper run on Saturday. I may have to do just a little bit more - seeing as a few of the escalators at my local shopping centre are out and I'm having to walk almost that much getting from where I have my coffee to where I get my groceries. And I may have to walk the dogs a couple of times seeing as their regularly-scheduled walker is still out of action. And I've also negotiated with Coach Chris to run/walk tomorrow during his speed session.

So much for following my program exactly as written. But I am following it in the spirit in which it's written - very low-level exercise which will barely get my heart rate up and will feel like I'm not exerting myself at all. Just enough for me to keep some semblance of sanity. And heaven knows I need just a semblance of sanity while I have a husband that has hardly been off the couch in over two weeks.

And by 'the couch' I mean MY couch.

In my twisted brain I've managed to see Iven's back injury as a diabolical plot to wrest control of MY couch from me. And let's not even mention the remote control. I've come to the firm belief that there's only a certain number of hours of watching the ABC News channel before you permanently lose your sense of humour. I think it's the over-exposure to politicians.

Can you tell that my grip on sanity is a tad tenuous?

I had to resort to my other non-running method of sanity-saving yesterday. It involved butter, sugar, flour, cocoa and eggs. And I may have gone a little over-board. 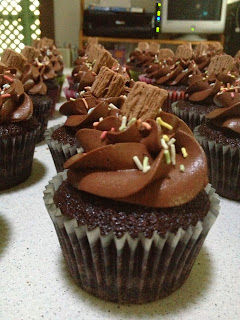 But can you really ever have too many chocolate cupcakes??

Just five days to go before until I get that first proper run. I've got a strange feeling that there'll be a few more cupcakes baked before this week is through.