If you're reading this today hoping to hear about my triumphant run on the weekend where I ran fast and ran strong and PB'd then you're going to be disappointed. There was no fast running or strong running or PB's. But there was triumph. Because triumph isn't always measured objectively.

Before I start, though, I will warn you that I'll be over-sharing in this post. So if you're at all squeamish you might as well walk away while you still can. But if you're a runner then you'll probably enjoy all the gruesome details because we thrive on all that stuff.

I'll start where I left off on Friday - feeling stressed about a whole heap of issues that had cropped up during the week. I'd vowed to leave them all behind in Brisbane and try to enjoy my weekend but, like the major stress-head that I am, I carried them all down to Melbourne with me. I'm just lucky that Jetstar didn't charge me for excess baggage. I was so stressed that I couldn't eat Saturday morning - not good when I'd hardly eaten Friday either.

We got in to Melbourne and were greeted by the Mum of one of Josh's friends, who'd been on the same flight as us. She'd run with the squad some years ago and had very kindly offered to drop us into our hotel. That was awesome and saved me worrying about the bus trip and finding where we were staying.

Our hotel was amazing! I'd been told it was fancy but had no idea until I saw the lobby. The views from our 40th floor room were spectacular. We dumped our luggage and went to find some food but again my stomach wasn't cooperating and all I could eat was a bit of rice and some chicken. Not fair - this was the one day where I could indulge my carboholic tendencies without guilt and I was being betrayed by my body.

As the afternoon wore on my anxiety levels started to rise. I couldn't face going out to dinner with Serena and Josh. I just stayed in the room and ordered a sandwich and tried to stuff it down my throat. My head was in a very negative state - I knew I hadn't eaten enough and it was going to literally mean running on empty. And that's if I could even make the start line. I'd prepared my gear and set my alarm but everything in me was just wanting to turn it off.

But I didn't want to let myself down. I'd trained for this for months. This was my way of celebrating the return of good health and proving that the dark days were finally over. And I didn't want to let down everyone who was rooting for me - and there were lots of people! Texts and Facebook messages - wonderful, supportive messages kept streaming in while I was sitting on my bed feeling just so awfully pathetic.

But it was one person in particular who stopped me from turning off my alarm. One very bossy, loving, kind friend who knew just what a nut-case I can be and who vowed that she'd do what it took to get me to the start line. She had her alarm set for the same time as me and told me that she'd be checking in first thing in the morning to assess my needs. So I really had no choice - the alarm stayed on.

But of course I woke up before the alarm. Played a few rounds of Words With Friends to keep my mind off things. Forced down a banana and a piece of bread and jam. Got dressed then texted my bossy friend to let her know I was dressed and as ready as I would ever be.

Josh and Serena walked me to the start and made sure I was settled with the squad before heading back to bed. There's nothing better than being surrounded by your running family to help keep the nerves at bay. My anxiety just melted away as we chatted and walked to the start line.

And then it was time to run. The gun went off at 7am and it wasn't long till we were shuffling over the line. I actually wasn't feeling too bad. I didn't feel a thing from my niggly Achilles. And for the first time in days I felt a little bit optimistic. Maybe it wasn't going to be so bad after all.

And it wasn't ... for the first 15 kilometres. But slowly my lack of fuel started to catch up with me. I was feeling way more tired than I should have at this point so I slowed down. And for the TMI part that I promised at the beginning - I was starting to get cramps. Not leg cramps but period ones. Of all days for it to come!

But I kept on. We ran down St Kilda Rd and then turned right along the waterfront on Beaconsfield Terrace then doubled back to run up the other direction.

At around 18k I realised that I couldn't see properly. It was raining but it wasn't rain causing my problem. I was getting an aura - the visual disturbance that people get before they get a migraine. Great!! Here I am not even half way through my event underfuelled, not being able to see properly, having period cramps, knowing that there was every chance I'd end up with a major headache and already feeling like I was done.

A couple of my friends ran past me and asked how I was doing. It really sucked to have to say that I was struggling even before halfway. But it was what it was and there was nothing I could do except suck it up and keep going. I told myself I just had to make it to the half marathon point. And once I made it there I wasn't too far from 30k and once I got to 30k I was going to allow myself to run/walk the rest of the way.

But I didn't quite make it to 30k before I had my first walk break. By 28k I had an awful stitch that just wasn't letting up. So I walked a bit. But when I stopped to walk the cramps felt worse. So I took the two ibuprofen tablets that I'd brought along as a 'desperate measure' and started to run again.

I kept on run/walking for a few kilometres as we headed back up St Kilda Rd. I felt miserable. I'd wanted so badly to finish this run better than I had my first marathon. I hadn't cared too much about the time but I'd wanted to run the whole way and I felt that I'd let myself down. But I wasn't going to give up. Sometimes just finishing instead of giving up is the victory so I continued to plod along as best I could.

I was almost up at the Botanical Gardens when two angels appeared on the course. It was my bossy friend, Bec and Youngie (another friend from the squad) who were doing the half marathon. I can't put into words exactly how much they lifted my spirits. I ran with them for a bit until their course veered off from ours but that little time with them was just what I'd needed.

I stopped to walk just once more up a long hill but something had happened in my head. My body didn't hurt any less but I'd surrendered to everything. Every step that I took now was a little victory against all the stressful things that had happened in the last week. A victory against my long stretch of bad health. Against all the personal crap that had happened in the last four years. Every step was like I was thumbing my nose at the universe and saying 'throw your worst at me, I'm not going to let it beat me!'

It was six glorious kilometres!

There was one clear moment where all I felt was gratitude. Even though I was hurting and everything had seemed to conspire against me in that last week, I was doing it. I couldn't have done it last year and all I wanted back then was just to be able to run. So how could I not feel grateful?

The 40k marker was a huge surprise - somehow I'd missed number 39. That was an exciting moment because I knew that the squad tent wasn't too far away. And once I reached the squad I knew that their cheers were going to carry me to the finish line.

The GaleForcers are a rowdy bunch when they see one of their own. They made me feel like I was a superstar. And it wasn't hard to run the last stretch into the MCG and around to the finish.

It might not have been exactly how I'd hoped, but I feel so much prouder of this event than my first marathon. And this medal is now the pride of my collection. 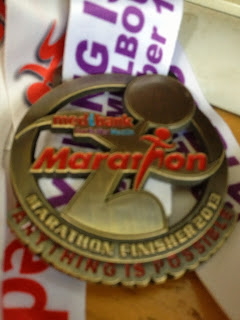 And before I finish I just want to say a huge thanks to every member of the GaleForce squad. You guys are truly amazing!
Posted by Char at 9:01 PM