My Weekend in Pictures

No, I didn't run a surprise race. That would have been more in my comfort zone than what I had to do last week.

What I'm recovering from is a long weekend of events. Some of which involved dresses, make up and uncomfortable shoes. Not much running to be had.

Thursday night was the night of nights for runners in the Galeforce Running Squad. It's our Oscars - where your name might be called out and you have to fight through all your screaming fans to receive your trophy.

It's such a fun night. You arrive at the venue and wonder if you're in the right place because no one looks familiar. Then it slowly dawns on you that the faces are sort of like the ones you see a couple of times a week just minus the red cheeks and sweat. Hair isn't hidden in ponytails or under hats.

But a lot of the talk is still about running. And races. Best story of the night didn't involve either of these, though. It was all about poo (another favourite of runners) and how the awards night got a certain mother out of cleaning up a floatie from the bath tub. 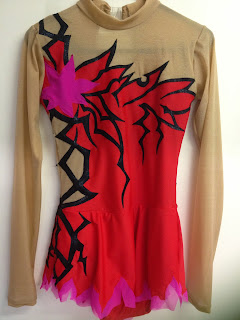 The sewing had to be done around another project that had to be finished that day. I was making another wedding cake for Tom and Bec, who'd been married in June in a very small event. They were having a renewal of vows ceremony and party for the rest of the family to celebrate the event. 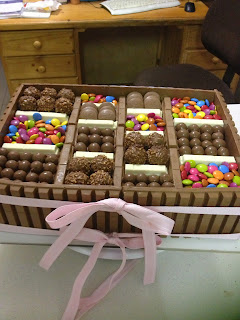 Not a traditional wedding cake. And I'm really happy with how it turned out.

I didn't run on Saturday. Two big days in a row and knowing another was to follow made the sleep-in option irresistible. I found myself in yet another dress, wearing make-up and having my hair done. Twice in three days! What's my world coming to?? 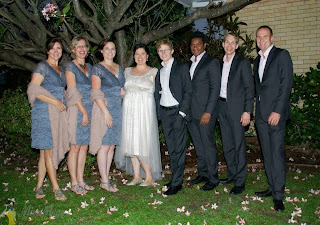 But the weekend wasn't over after the 'wedding'. I still had another day to fill to the brim if I chose so I started it early with a run up Mt Coottha. Note to self - fluoro pink may not be the best colour to wear if you don't want people to notice you when you have to take a desperate detour into the bushes. And just ignore the sniggering cyclists that recognise your outfit later on during the run.

Then Iven and I went shopping for a Christmas tree to replace the one we'd had to throw out after the Great Rat Incident of 2010. (Heavily pregnant mummy rat had to find a place to have her litter and the box containing our Christmas tree seemed like a good idea, seeing as Christmas is all about pregnant females having babies in untraditional places. The tree never smelled the same afterwards despite copious spraying with pine-scented deodoriser.)

All the girlfriends were over yesterday afternoon so there was plenty of help to get it decorated. 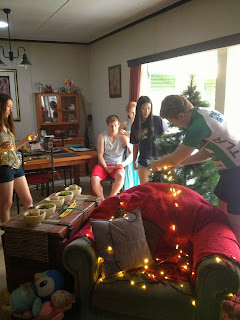 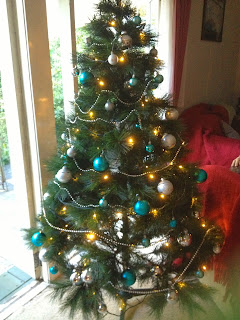 And that left me plenty of time to have fun making Toby pose in humiliating head-ornaments. 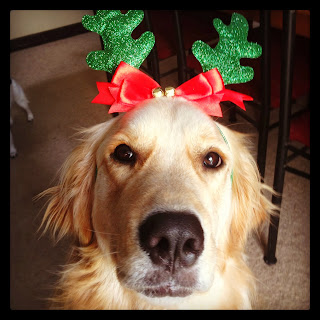 So how was your weekend?
Posted by Char at 2:38 PM