A Cautionary Tale For The Spouses Of Marathoners

I've been tired this week. Achingly, bone-weary tired. And cranky. Look-at-me-sideways-and-I'll-poke-your-eye-out-with-a-blunt-chopstick tired. And talking about chopsticks - I've been hungry too. Rungry.

Special dispensation should be made for runners in and around peak week of marathon training. Especially by their spouses. We might glare at you for eating too loudly. We might threaten physical harm for eating the one and only thing in the full refrigerator that we were craving. We might go one step further and punch you on the arm for deciding to mow the lawn when we were trying to nap. We might be totally and unfairly unreasonable but in our exhausted brains be able to convince ourselves that our thinking is reasonable and fair and just.

I'm telling the following story as a cautionary tale to the uninitiated marathoner's spouse or the spouse who still hasn't understood the rules to living with a marathoner in heavy training.

A week and a half ago I went down to Sydney with #2 son leaving my very own marathoner's spouse home alone for 2 days. Before I asked, being a loving and caring wife, I asked him how he'd be filling his time. Apart from sitting on the couch naked, eating crackers and cheese and gherkins and watching the sci-fi channel. And he told me that he was planning on patching up the paint in the toilet.

Now our toilet is tiny. I painted it last time and it took me less than an hour. In the twenty years since it was done it's had one of the boys fall against the wall and crack the fibreboard which was patched and painted in a slightly different shade of blue. Then we replaced the old toilet that used to get blocked frequently with a shiny new one that only blocks occasionally. The new one had a different sized cistern so our toilet wall had a nice outline of the old one. It was sadly in need of a new paint job.

I suggested in not too whiney a voice that he might paint the whole thing rather than just patch it. He looked horrified. Not at the amount of time that it would take away from his naked, cracker, cheese and sci-fi fest but because he would have to choose the colour of the paint. Because he would get it wrong.

I assured him, in my marathon-addled-brain state that it couldn't go wrong if I gave him a fabric sample to colour-match fairly closely. So I found something that I liked the colour of and left it for him to take on his paint-shopping expedition. He couldn't possibly get it wrong, could he?

When I came back from Sydney exhausted but elated two days later I found out the answer to that question. First thing I did when I walked into the house was have to use the facilities and when I turned the light on I was flabbergasted. Where was the nice calming grey-blue that I'd chosen? Had I got it wrong and not realised that it was almost an aqua blue that clashed so badly with the adjoining bathroom and bedroom?

I got out the piece of fabric that I'd carefully chosen for him to match and it was nothing like it. So now I was left with a very hard choice to make. Be a kind and loving wife and ignore the ugly colour clash for the next twenty years till it's due for its next paint job? Or be the nasty bitch wife?

He didn't take it very well. At first. But when I admitted that I was being a bitch but that I was HIS bitch he softened a little and said it was the nicest thing I'd said to him in years. And I got my toilet repainted. But this time I chose the colour.

So the moral of the story is if your spouse is in the throes of marathon training and goes away for the weekend, do not decide to paint anything. But if you really can't resist the lure of the paintbrush, take the colour swatch along with you to the paint shop and don't try to remember the colour. But if you do choose the wrong colour, just be gracious when your marathon-crazed spouse has a hissy fit and repaint the damned toilet without complaint because really this is a fight you won't win without divorce proceedings. 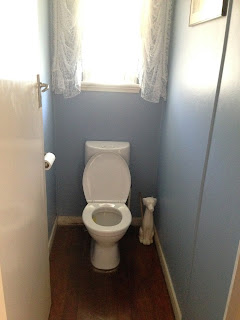 And, for the love of God, DO NOT rearrange her wardrobe while she's away. Even if you think it works better that way. She will not thank you for it. But that's a story for another day.