I had a race today. But what do you call a race when you're not really racing it? Let's just call it a run with a few thousand like-minded people. Or an opportunity to get a free green cap. Or a reason to bake for your 'other family'. Or just a reason to get up early-ish on a Sunday and hang out in the sun.

It was the Park to Park out at Ipswich (only 30 mins drive away) and the Galeforce Running Squad is a major organizer of the event so quite a few of us wanted to support it. And with so many of the squad going, there was good reason to bake up a storm. I'd decided to do the 5k because the course is a nightmare of hills. Don't get me wrong, it's an awesome event that's so much fun to be a part of but the course is just one hill after the other - and we all know how I feel about hills.

At this point I must say that yesterday I ran a 20k LSD which ended up not being as S as I was planning. I got in with the 'wrong crowd' and succumbed to peer group pressure and we negative-splitted that baby. And it was a hilly run. When one of the roads you run along is called Hillside Terrace you know that there is going to be some uphill pain involved. So this was why I wasn't planning on racing. I did what I could to recover - ate well, rehydrated, compressed and had a 2 hour afternoon nap but I could feel some fatigue in my legs when I creaked out of bed this morning. (and I don't mean creep. Creak was the sound of my body getting from horizontal to vertical)

What I like about this event is that it's smaller and friendly. I got there an hour before the start and had no trouble finding a park on the road about 100m from the start line. I picked up my race kit, found friends, went to the loo and dumped my gear in the baggage area. Then we were off.

It's 100m flat and then the first hill. And it's a beauty! About a 700m incline - not terribly steep but it does get your heart going. Finally it flattened a little and we hit the 1k marker and then it was up again before I'd quite caught my breath. At about the 1500m mark we finally got a decent downhill where I could catch up a bit of the time lost on the up. My first k was 5:08 at the marker and my second k was just under 5:00. But there was no rest for the wicked. The third k had a few short, sharp ups and downs and my watch clicked over at 5:06. And then we hit the Mother-of-all-that-is-unholy hills. Again, it wasn't monstrously steep but it went on and on and on. I was getting slower and slower but then we hit the top and I could hear the announcer at the finish line and I knew I only had 1k to run. My last k was my fastest and I crossed the line feeling a bit worse for wear in 25:22

My immediate reaction was disappointment. It was 1 min 20 slower than last time I ran it 2 years ago BUT that was before overtraining and I hadn't run 20k the day before so I convinced myself that it was very respectable. I finished in the top 5% of ladies and 5th in my age group (which was one of the most competitive)

And then I got to bask in the glow of cupcake-friendship, eat stuff that's probably not the best recovery food and sip a cappuccino in the warm Winter sun. 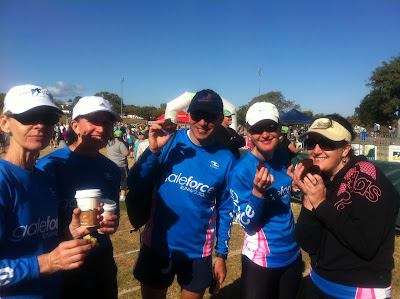