There were a few things about the Gold Coast weekend that I didn't mention. The first was food, because what is a running weekend without food?! I had dinner with Natalie and Daniel (and Iven of course) at the Thai restaurant that we were supposed to have dinner at last year but had to cancel because of the small matter of leaving my bag/keys/wallet back in Brisbane. Amazing food! Light, tasty and hot - just the way I like it. It was light enough that I still had a bit of room left over for something sweet and yummy. My favourite dessert? Ice cream!! We walked up to Cavill Mall and I had a double scoop of butter pecan and chocolate almond in a choc/nut encrusted waffle cone. It would have been at least a day's calories but it was worth every bite.

The 10k course has recently changed. This was the second year of the new course and I must say that I preferred the old one. I think that if we're that close to the ocean we should get to see it at least once during the run. We used to but the new course takes us along the Broadwater which is basically a canal. No waves :( It's just uninspiring.

My other negative from the run is that the 10k has been shifted to the Saturday. We don't get to be part of the hype like we used to 2 years ago but the 5k event has stayed on the Sunday. I know it's a logistical thing but it's hard not to feel like you're second-class citizens when everyone else gets to run on the big day. And the 10k always seems to get the ugly colour t-shirt. For 5 of my 7 years I've had hideously ugly shirts that I have to give away. This year it was a charcoal grey with an olive undertone. The half marathoners got a lovely royal blue and the 5kers got a lime green. I definitely have t-shirt envy.

But the upside of having a Saturday start is that the toilet situation was excellent. The queues were minimal and they weren't too feral. And there was ample toilet paper and that's always a plus.

I'm starting to come down from my post-Gold Coast high. It's such a pity that life has to get in the way of having a permanent holiday. It's been back to washing, cooking and sewing this week ... ah my humdrum existence. I have had one run - speed yesterday which was a modified session for everyone who'd run on the weekend. My times were respectable for the 1 mile reps but my heart rate is not. I'm walking a fin line again so I'm going to have to be very moderate for the next week or so to make sure I don't go over the edge. Frustrating!! I've come home from last weekend all pumped and ready to train hard but my body is putting on the brakes again and I know what will happen if I don't listen.

And finally I thought you might like to see a sneak preview of what I've been working on this week. You might get to see this one at next year's Olympics. 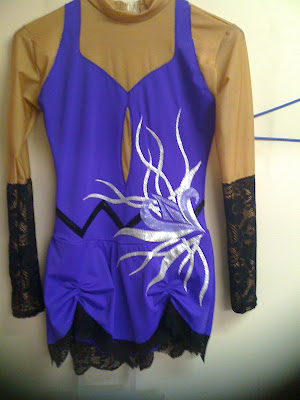